← The State and Consumer Desire: The Case of Doughnuts and Soda
The Materiality of Complete Streets → 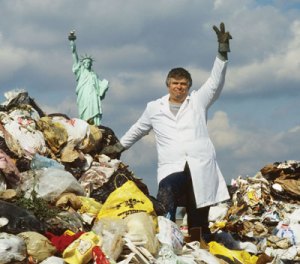 A position every archaeologist wants to assume.

Yesterday I received an email from a proud grandfather whose precocious 11-year old grand daughter was fascinated by archaeology, and he wanted to fuel the fire and know what he should get for her to read.  Without any reflection I suggested to him the same book have I suggested to that same inquiry countless times: I indicated he should buy her a copy of Bill Rathje’s Rubbish!: The Archaeology of Garbage (1992, co-authored with Cullen Murphy).  Rubbish! is exceptional for its ability to be succinct and readable while making absolutely clear and persuasive points about the genuine power of archaeology as a mechanism for social activism and policy change.  Rubbish! is at once a lyrical, reflective, creative, and amusing tale of how refuse management has shaped human history across the breadth of complex societies, never concealing its debt to archaeological method and insight yet never becoming bogged down in the details of material life and always returning to remind us that those otherwise prosaic methods can be used to change some of the most consequential dimensions of our material lives.  I have taught the book at least once every year for 15 years, and it universally illuminates some of the most familiar dimensions of students’ lives in ways they had never recognized before.  It is one of those very rare books that makes me jealous that I did not think of it first even as I silently acknowledge that the book’s accessibility belies the depth of its scholarship and it’s sheer intellectual creativity.

Bill Rathje died May 24th, leaving behind Rubbish! and a rich scholarship on contemporary materiality that may have had a more widespread impact than nearly any archaeologist in the past half-century.  Certainly there have been some astounding scholars in that time who profoundly changed archaeology and influenced a vast range of subsequent scholarship, but few of them could deny Rathje’s impact beyond the academy even as his work dramatically shaped archaeology itself.  Many of us will write some monographs that have a modest impact on a circle of scholars and perhaps even a few non-academics, but few archaeologists can ever hope to find such a compelling topic and then rigorously analyze the questions and produce an accessible and compelling study.  Nearly all archaeologists interested in public engagement march out Rathje’s garbology studies as an example of the power of public archaeology to enchant non-academics, advise government administrators, and shape consequential public policy.  For the astounding number of international scholars now examining the contemporary material world, Rathje’s work paved the way, legitimizing archaeologies of us, establishing the relevance of archaeological methods outside an excavation unit, and persistently reminding people that archaeology is always about the contemporary world.  Few scholars can ever hope to have such broad scholarly influence and be so well-liked and respected, and probably no archaeologist can match the impact Rathje will have on all corners of archaeology long into the future.

← The State and Consumer Desire: The Case of Doughnuts and Soda
The Materiality of Complete Streets →