Archaeology is Consequential (and Boring) 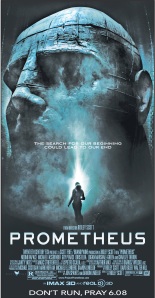 Prometheus harbors a somewhat dystopian thread that warns of the dangers of actually finding our makers.

I recently saw the nominally archaeological movie Prometheus, which starts in promising enough fashion addressing the origins of humankind and perhaps even warning us of the dangers of finding our makers, only to be reduced to lots of foolish astronauts getting murdered by creepy monsters.  Disappointing though Prometheus may be, it makes archaeology profoundly consequential, taking aim on the most fundamental question in life and invoking a deeply meaningful world of faith and mythology that ponders who we are, where we came from, and what separates us from other animals.  Where real archaeology tends to be boring despite revealing the meaningful dimensions of everyday life, Prometheus paints archaeology as a mythical science unlocking the essential questions about life that lay locked in the past.

The film evokes Chariots of the Gods mythologies, focusing on how inexplicable symbols in an Inner Hebrides cave reveal the workings of interplanetary travelers who seeded the Earth millennia ago.  In the late 21st century, two archaeologists on the Isle of Skye find cave murals that they determine are an invitation to visit another solar system to meet our makers.  (While not always convincing, Cavalorn’s dissection of  Prometheus’ mythology is a clever and interesting analysis of the weightiest dimensions of the movie.)  The archaeologists who piece together the repetition of the Scottish motifs in various other places help convince a ridiculously wealthy old man to rocket into space to meet these makers, and at that point the movie has nothing more to do with archaeology even tangentially, reducing itself instead to a predictable horror movie stocked by some really stupid astronauts and predictable situations.

Of course archaeological projects are boring in the same way as nearly all everyday life.  Nevertheless, we do not go to the movies to see real life.  We go to the movies, watch TV, play video games, and go to theme parks because they present the most spectacular dimensions of ourselves back to us in a distorted reflection that is recognizable yet evades all the dull repetition of everyday life.  Certainly archaeologists might reasonably quibble with Prometheus’ distortions of archaeology, just as the Chariots of the Gods narratives madden scholars who accept that monumental triangular-shaped architecture might well have been produced independently by people in the New and Old Worlds alike without the architectural assistance of aliens.  Prometheus does not venture into the common popular cultural narrative that reduces archaeological artifacts and spaces to narrowly defined “treasure,” which is perhaps more challenging to un-do than the suggestion that an archaeologist can re-animate a corpse or unlock a time portal.

Prometheus identifies these muscular blue aliens (the “Engineers”) as our creators.

The Indiana Jones’ films craft a similar fascination with the supernatural world unlocked by archaeologists, as do the Mummy films, Stargate, and the Tomb Raider series, all of which are charged by a notion of archaeology as a moral and scientifically grounded pursuit of the truth that confirms various mythological realities.  Submerged ancient cities, the peopling of the Americas by Biblical peoples, and distant visits from aliens are emotionally and intellectually satisfying because they provide much more conclusive answers than science itself, which is a complicated and ever-unfolding discourse marshaling new facts at every turn and reassessing the frameworks that we’ve inherited.  In contrast, the Prometheus mythology provides a more elegant and complete answer to where we came from, which is a single bunch of muscular, bluish aliens with pitch black eyes who left one of their number to sacrifice himself and begin the genetic process of seeding earth.  Audiences are smart enough to realize this is not a tale supported by any evidence—just as we understand that an animated rodent cannot manage a magical fiefdom, or that life is never as resolute as any professional sporting event—but we consume those narratives because they provide a clarity that is rarely provided in our real lives.  It is not really fruitful simply to distinguish between fact and fiction (compare Mark Hall’s analysis of archaeology in the movies); instead, everyday life and real archaeology fail to provide the compelling drama, conclusiveness, and narrative tension most of us wish was part of our quotidian lives, and popular culture fills that void with exaggeration addressing those desires.  Prometheus wields archaeology and the specter of scientific objectivity to reproduce its mythology, and we suspend our disbelief for a couple hours because we enjoy creative distortions.

Archaeology as a concrete practice involves remarkable patience that reveals patterns and interpretive narratives very gradually, which is not especially conducive to popular cultural depictions or the timelines for movies and TV shows.  Yet archaeology surfaces in popular culture to address contemporary social questions, and it is not unreasonable to argue that archaeological scholarship does the very same thing (this is a central thesis of Cornelius Holtorf’s book From Stonehenge to Las Vegas: Archaeology as Popular Culture).  The degree to which people actually buy into totalizing narratives that answer the myriad range of imponderables science simply cannot answer is unclear:  For instance, despite the overwhelming scientific evidence for evolution, one 2007 poll indicates that 43% of Americans believe that God created humans in the last 10,000 years (a 2010 poll placed this figure at 40%).  There simply are some things science cannot answer, and it is in those margins that various threads of faith as well as popular mythology flourish, in large part because both provide conclusive answers (albeit the latter for distraction and entertainment and the former for deeper emotional resolution).

Archaeologists routinely contest the degree to which an authentic past can be accessed scientifically, with Cornelius Holtorf arguing that archaeology really is about our contemporary world and how past peoples provide a lens refining our picture of our own everyday world.  This implication that archaeology is an imagining of the past has been greeted by a host of very critical voices, with Kristian Kristiansen’s response and Holtorf’s defense among the most interesting (Marko Marila’s blog also creatively plumbs the philosophical complexities of past and present).  We can still accept that archaeology constructs a past, albeit with reflective understanding of contemporary politics, an appreciation for scientific rigor, and a firm voice that speaks against gross ideologically driven misrepresentations (e.g., Nazi archaeologies are the classic example, but certainly many web pages, movies, and TV shows are laden with nationalist, racist, and patriarchal distortions not supported by sound archaeological data).  Archaeology may be a boring everyday practice, and mythologies may sometimes provide more emotionally satisfying answers than archaeology, but it has genuine social consequence.