The earliest surviving portrait of Richard III shows him in about 1520.

This week no archaeological story has received more press than the confirmation that a skeleton excavated in Leicester in September 2012 is indeed the mortal remains of Richard III, the last Plantangenet King of England.  Archaeology often is aesthetically compelling and provides a fascinating narrative, and in this case a thorough and compelling scientific study and the tale of a king slain in battle, ending his line in the ignominy of an anonymous hastily dug grave, is especially captivating.  The presentation of that data on Monday—and some observers’ qualms about how such scholarship is presented in public space—actually sound some interesting questions about the public presentation of archaeology.

Richard III’s two year reign ended in 1485 at the Battle of Bosworth Field, which ended the War of the Roses and ushered in the Tudor dynasty.  Richard’s corpse reportedly was stripped, thrown across horseback, and taken to nearby Leicester, where it was on view in the church of the Greyfriars and subsequently buried.  The church itself was razed during the 1530’s dissolution of the monasteries, and for over four centuries Richard’s mortal remains were lost.

In September 2012 the University of Leicester Archaeological Services conducted an excavation in a parking lot at the likely Greyfriars site.  The Leicester archaeologists were sober about the likelihood they would recover Richard III, but they recognized the site would certainly provide medieval and post-medieval material, and they conducted a radar survey and the subsequent excavations.  Against all odds a skeleton was identified on the first day of excavations.  The remains had severe wounds and a pronounced skeletal curvature suggesting the body could be that of Richard III, and carbon dating, osteological analysis, and DNA testing with Richard’s living descendants demonstrated beyond reasonable doubt that the body was indeed that of Richard III.

The University of Leicester was justifiably proud of their ULAS excavation team, and on February 4th they had an elaborate public program at which the Leicester scholars presented the results of their analyses.  The unveiling of the rich archaeological data and the fascinating detective tale conducted by the Leicester archaeological team was good theater, and I was among the archaeology geeks who woke up before daybreak to watch the news being streamed and monitor twitter as the analysis was shared publicly for the first time.

Yet a few voices have expressed chagrin at the corporate overtones of a scholarly presentation that for some critics seemed orchestrated for the benefit of university fund-raising or to boost Midlands’ tourist business. For instance, Mary Beard complained in The Times Literary Supplement that “What put me off was a nexus of things to do with funding, university PR, the priority of the media over peer review, and hype … plus the sense that–intriguing as this was, a nice face to face moment with a dead king–there wasn’t all that much history there, in the sense that I understand it.”  Bristol Professor Neville Morley whined that “I know it’s all about money; the publicity fluff is a means of getting funding for more serious research … But at what point does the publicity game take over, and the need for a gimmick to ‘justify’ the project start becoming the real driver of the project?”

The Leicester team’s scholarship certainly is rigorous, well-defended, and absolutely compelling, and many of the critics at least circumspectly accepts their conclusions.  Yet Neville Morley is skeptical if not contemptuous of the project’s significance, arguing that “the newsworthiness of an archaeological discovery is probably in inverse proportion to its actual significance, certainly if the excitement about this one is anything to go by.  On balance – and in the absence of any of the detailed evidence – it looks like it is the body of Richard, but I don’t think that tells us anything very interesting either way.”  The Guardian’s culture blogger Charlotte Higgins reduced the press conference to interesting but shallow artifice meant to demonstrate public impact, raise money for the University, and masquerade as “good” scholarship: “Yes, no doubt it will help the department secure funding (which is surely what all the jamboree was about, in the end). All of that is fine. But it’s not really history, not in any meaningful sense.”

What these comments reveal has nothing to do with the scholarly impact of the Leicester project.  These relatively isolated voices refuse to accept that some essential dimension of good scholarship can in fact be informed by popular curiosity.  As Morley and Higgins retreat back to the ivory tower, most academics like the scholars in the ULAS are actively part of their communities and doing rigorous scholarship that weighs popular curiosity and does not have the audacity to suggest that there are some timeless scholarly questions impervious to the sands of time or the sentiments of society.  The University of Leicester page detailing the excavations is indeed a clever and thorough presentation that recognizes the popularity of archaeology as well as this particular historical narrative, and their telling is good science and good story-telling. 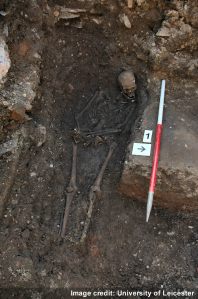 The Richard III skeleton in situ (image University of Leicester).

These kinds of scholars resisting popular culture are increasingly rare, repelled by the impression of the popular on any academic scholarship.  Some academics want to present their research, science, and knowledge in particular sort of conventional forms and are not warm to the notion of press conferences and half-hour television shows.  Beard ostensibly fears that such orchestrated presentations untrack the scientific process, expressing reservations over “a complicated bit of scientific analysis being given its first outing in a Press Conference, not ever having been through the process of peer review. DNA evidence is tricky and any scientist would want their results peer evaluated before going completely public. … But the idea of the publication of research by press conference isn’t one I feel very comfortable with (as a member of the public, I want not just a story, but a validated story).”  But this aside is really only a smokescreen for her anxiety over “the question of whether media interest starts to set research agendas. This runs through many areas, but especially archaeology. … I’m quite prepared to believe that this skeleton is Richard III (he’s where we would have expected him after all) — but he is part of a climate which pushes people to celebrity history and archaeology, and may even detract from more important work that doesn’t have that glitz.”

The increasingly common presentation of archaeology in popular media and as a media-friendly face for the academy inevitably casts archaeology in stereotypical ways.  Can television shows or thorough press conference like the ULAS session actually capture a complex archaeological analysis?  Maybe the more challenging question is instead can archaeology make the complexities of past experiences and materiality interesting in a more satisfying way than popular culture?  I believe in scholarly rigor and understand that complex historical and academic narratives cannot be easily reduced to palatable popular representations, but every archaeological and historical narrative is inevitably itself “incomplete” or might be interpreted in fresh ways by other scholars.  I am not very sympathetic to the judgmental voices that believe archaeology in particular and academic knowledge in general must take a highly specific form, and it at best suggests a lack of creativity to be unable to fathom that interesting and academically relevant research questions can be asked of essentially any material data.

Posted on February 5, 2013, in Uncategorized and tagged Richard III. Bookmark the permalink. 6 Comments.