T-Shirts for sale at the Philadelphia Wizard World Comic-Con

Most pictures of the geek experience highlight the aesthetic and material visibility of geeks: that is, we can “see” geeks, who signal their social distinctions with material style ranging from clothes to super-hero statues to backpacks to body form.  Among the pantheon of geek material goods, perhaps no element is more visible or common than the prosaic t-shirt, and geek t-shirts provide a compelling if somewhat novel mechanism to illuminate geek-ness, the notion of “geek culture,” and the intersection of geeks, style, and marketing.

The idea of a geek culture carries with it some intellectual baggage rooted in conventional anthropological definitions of culture, and the problem of defining geek “culture” is common to definitions of many other contemporary social collectives.  Anthropologists have been destabilizing the idea of culture—the very concept that defines the discipline—since the 1970’s, complicating the facile distinction between the West and the Other that characterized colonial analyses of the world.  We live in a moment in which something approximating a global consumer culture has collapsed how we see difference, imagine community, and craft distinction, leaving us in an interconnected world in which “us” and “them” are not especially useful polarizations.

Culture is a somewhat mechanical concept if we approach it in terms of bounded membership (e.g., “real” geeks and poseurs) or simply oppose it to some caricatured foil (e.g., geeks as a contrast to the “mainstream,” “sports/jock culture,” or some other stereotype of “normality”).  For some anthropologists, culture is produced for specific sorts of social reasons; that is, culture is not something essential like where you were born or your skin color, but it is instead constructed to represent distinction and create a sense of separateness.  When geeks appropriate the moniker of “culture,” they perhaps stake a clumsy claim to the social legitimacy, authenticity, and distinction associated with traditional definitions of culture.  Social groups like geeks routinely celebrate themselves as a “culture” because that concept distinguishes them as a unified and distinct group separated from the materiality, taste, and practices of the masses.  We can literally see those differences in mundane things like distinctive t-shirts. 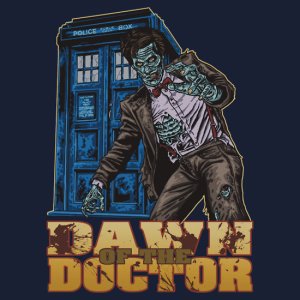 Zombies and Doctor Who are among the most popular geek motifs, sometimes even crossing over onto the same shirt (image ShantyShawn, Red Bubble)

The emergence of the branded t-shirt is a relatively recent phenomenon.  The superhero and sci-fi shirt market once stopped at middle school sizes just as Batman jammies transitioned to teen sizes and adult styles.  Concert t-shirts—the obscenely over-priced confirmation you did indeed see Grand Funk Railroad—were one deviation from that t-shirt market (the first concert souvenir shirt was apparently a 1956 Elvis shirt, and the Monkees sold shirts on their 1967 American tour), and some resorts began to produce branded shirts advertising their resorts in the 1950’s.  Popular franchises like Planet of the Apes and Doctor Who were long tied to branded goods like toys, but adult clothing was an uncommon branded item.  Kids’ clothing was sold in department stores alongside other children’s fashions, and toys had a dedicated department in most stores, but adult t-shirts were mostly available only as undecorated undergarments in the men’s underwear section. 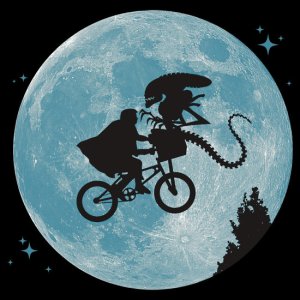 ET flies across the moon’s face with a new Alien cargo (image from runstop, Red Bubble)

An emerging marketplace in the 1980s and into the 1990s was sci-fi conventions. Fans had gathered at science fiction conventions like WorldCon (1939) since World War II, but they were joined by many more fans with the introduction of Gen Con (gaming) in 1968,  Comic Con in 1970, Eurocon (European sci-fi) in 1972, the World Fantasy Convention in 1975, Comiket (anime/manga) in 1975, the North American Science Fiction Convention in 1975, DragonCon (multiple genres) in 1987, and a host of more specialized and regional conferences and ever-more comic and sci-fi shows in the past 20 years.

Fueled by the explosion in geek conventions, the most significant expansion of the t-shirt market—and many other geek commodities—came in the past 20 years, and much of it has been driven by internet sales and marketers’ increasingly aggressive appeal to geek consumers.  The scatter of homemade silk screens and DIY shirts made in the 1970s and 1980s now pale in comparison to the legion of shirts that are marketed internationally online.

Any Doctor Who fan will know that the Doctor has two hearts (image Okse, Red Bubble)

As with all things geek, the conditions that qualify a shirt as geek are somewhat ambiguous.  Mass marketers aspire to manage brand symbolism, so somewhere in the flood of officially branded Iron Man or Walking Dead shirts there are corporate efforts to structure the meaning of the franchise and manage fan demand for the goods.  In a do-it-yourself moment, though, a crowd of modest artists, fans, and marketers appropriate those brands; legally we cannot make and sell Portal shirts, but the corporate legal effort of shutting down every modest seller on Red Bubble and ebay may not be worth the cost, and it is certainly counter-productive in fan communities.  The result is an absolute flood of shirts in every possible motif, some officially sanctioned and many more fan homages. 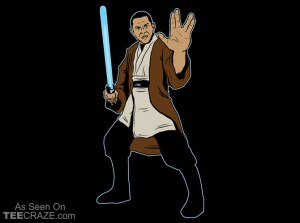 Within days of the President’s reference to a “Jedi Mind Meld,” this shirt appeared placing the POTUS in both Star Wars and Star Trek (image from T Shirt Laundry)

This flooded market has yielded symbolic geek riches.  Perhaps the central geek value that shapes the meaning of t-shirts is novelty.  Geeks value clever and novel plays on shared symbols—for instance, the “Ewoking Dead” hybridizing two geek franchises (zombie crossovers range from Peanuts to Hello Kitty to Tron), Mad X Men, or various interpretations of icon scenes like ET riding an airborne bike in the moonlight.  A “good” shirt is inevitably a subjective notion, but the most compelling motifs seize on geek franchises (e.g., the universe of Doctor Who shirts knows no bounds), employ phrases familiar only to insiders, or are timely (e.g., within days of his reference to a “Jedi Mind Meld,” a t-shirt appeared featuring a Vulcan Obama in a Jedi robe; a “Red Wedding” shirt from Game of Thrones was available the day following the episode).

At major conventions it is increasingly more common to find that very few people are wearing the same t-shirts.  The sales floor of every convention is always its busiest space, and a series of web pages like T-Shirt Roundup and Hide Your Arms do nothing but inventory t-shirts for sale on any given day.  The highest geek fashion complement today may be “Where did you get that shirt?,” yet this is a tribute to shopping resourcefulness as much as it is flattery to taste: demonstrating t-shirt style requires a geek to be as good a shopper as many of the masses so commonly dismissed by geeks, so t-shirts underscore the geek immersion in consumer culture.  Certainly many t-shirt sellers are individuals managing modest operations and celebrating their favorite geekery, but a host of firms now sell a vast volume of t-shirts and assorted commodities explicitly marketed as “geek.”

A wall of t-shirts at Wizard World

A t-shirt is perhaps a somewhat distinctive geek commodity, since it is worn outside the confines of conventions and comic shops and confirms in public space the consumer’s attraction to Game of Thrones, Hitchhiker’s Guide to the Galaxy, Sherlock, Firefly, Lord of the Rings, and myriad other geek realms and franchises.  Some symbols have pretty universal recognition (e.g., Superman and Batman), but others are much more of a niche that may be incomprehensible beyond geek circles (e.g., the Torchwood Institute symbol).  For some observers these shirts are homing signals that identify fellow geeks and weed out those who cannot recite Roy Batty’s final soliloquy.  Nevertheless, such symbols are not purely “other-directed” and meant to establish affinities with other geeks: geek symbols are perhaps equally if not more important for how they make the consumer feel.  Batman, for instance, could be a sign of law-and-order, rebellion, or style, and none of those meanings are exclusive to each other or necessarily even articulate.

We can circumspectly acknowledge a body of social practices that distinguishes “geek culture,” but at the same time it is firmly embedded in broader marketing patterns and consumer values.  The notion of a clearly defined mainstream culture against which geeks are contrasted is mostly a rhetorical maneuver that evades the deep impression of geeks in consumer culture, if not their centrality in that society.  Any efforts to define geeks—call it a culture, subculture, post-subculture, tribe, or any other term–need to examine who we imagine ourselves to be; what socially unites a circle of people attracted to games, sci-fi, cosplay, and comics; and how dominant ideologies and market structure shape the expression of geek selfhood.  Culture is partly an idea that imagines self and others; it is partly a document of shared experiences, a common everyday life; and it is partly a set of structural material conditions.  Any reflective understanding of geeks needs to examine all of these interconnected dimensions of geekhood and contemporary life.

1992 Beyond “Culture”: Space, Identity, and the Politics of Difference.  Cultural Anthropology 7 (1):6-23. (subscription access)

2007 Looking Inside Out: A Sociology of Knowledge and Ignorance of Geekness. Human Architecture: Journal of the Sociology of Self-Knowledge 5(2): 41-50.

Dawn of the Doctor shirt image from ShantyShawn on Red Bubble

Doctor Who Hearts image from okse on Red Bubble

Posted on June 7, 2013, in Uncategorized and tagged #WPLongform, Doctor Who, geek, t-shirt. Bookmark the permalink. 3 Comments.