Geek Wars: The Politics of Media Fandom and Geek Conventions

The Ghostbusters wander the hallways of the Louisville Convention Center

This week a convention in Louisville, Kentucky served notice once more of the concrete and distinctive politicization of geek fandom while it also reminded geeks of the erosion of their insularity from mainstream society, casual fandom, and capitalism itself.  A weekend of breakdowns at the FandomFest convention—cancelled events, multiple conflicting schedules, photograph lines lasting for hours, and poor spatial management, among other things–resulted in mounting frustration, increasingly grumpy tweets, and the most feared of all nerd battle cries: “I am going to blog about this!”  The responses to FandomFest underscore the digital sociopolitical dimensions of contemporary geekdom; however, they simultaneously reveal the ways once-insular and well-defined geek fan communities have become a dynamic media fandom inseparable from the broader fabric of popular culture and ripe to be colonized by the mass marketplace.

The failures at FandomFest are perhaps symptomatic of the growth of convention culture in particular and geek fandoms in general.  The “mother fandom,” in the words of Fanlore, is probably Star Trek, whose fans began orchestrating conventions in the early 1970’s (and one fan gathering that may claim the award for first Trek con was held in Newark in 1969).  From the very beginning these Trek conventions included personalities from the show itself:  Gene Rodenberry appeared at the 1972 Star Trek Lives! Convention and other cast members appeared at subsequent fan-organized conventions through the 1970s.  Those fan-run conventions produced little or no profit for their organizers, but they served notice that geeks were a potentially massive constituency:  the 1974 Trek Lives convention, for instance, hosted 15,000 people and reportedly turned away another 6000 people. 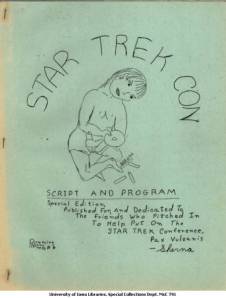 The Trek conventions were very much fan-organized events whose structure is familiar to anybody who has been at contemporary conventions.  Rodenberry and the Trek casts’ appearances at the 1970’s Trek conventions underscores that fandom has long embraced the allure of personalities.  The 1975 convention, for instance, was simply a series of appearances by the Trek stars (punctuated by Isaac Asimov and Harlan Ellison), lacking any panels assessing the philosophical dimensions of Trek or science fiction.  There was never an especially clear division in Trek fandom between, on the one hand, a fandom focused on the personalities themselves (e.g., Q-and-A sessions with the stars recounting “life on the set” stories) and, on the other hand, a genre fandom (e.g., panels intellectually contemplating the complexities of multiculturalism in Trek or deconstructing science fiction tropes).  The most dramatic transformations in Trek conventions came with the arrival of corporate profiteering: ironically, Star Trek conventions declined after the 1979 Trek film, which appeared a decade after the show had been cancelled; the studios subsequently wanted to license Trek events, and stars began to demand significant appearance fees.

Geeks will sometimes cynically if not romantically distinguish between fan-cons and professional cons, the former the labor of fan passion and the latter intended to produce profit.  Fan-cons typically focus on specific fandoms and are small crowds (e.g., the Sherlock Convention celebrates the BBC interpretation of the classic detective tale); others have transitioned to kindred fandoms  (e.g., Wincon was a Supernatural convention from 2006 through 2009 before becoming a multi-fandom con providing “a safer space for women, queer people, and under-represented fans of popular media and culture in all its infinite varieties (just like us)”); and others focus on a specific fan community (e.g., GaymerX  is a LGBT gaming convention).  Yet the lines between a fan-con and professional con are increasingly ambiguous, and increasingly more revolve around media fandoms—that is, fandoms that reach beyond one franchise–in which conventioneers are bound by kindred passions that may fix on The Walking Dead as well as Evangelion.

FandomFest was in many ways typical of the contemporary media fandom conventions, aspiring to capture every possible stripe of geek: everyone from gamers to cosplayers to anime fans to zombie fans were targeted by the convention.  FandomFest is typical of the wave of professional conventions who focus on attracting some very well-known personalities—in this case, Gillian Anderson, Stan Lee, William Shatner, John Barrowman, some of the Firefly cast, Colin Baker, Kevin Smith and Jason Mewes, Walking Dead cast members, and a host of somewhat luminaries covering generations (e.g., Butch Patrick, a.k.a., Eddie Munster) and cult classics like Clerks’ Brian O’Halloran.  These celebrities’ appearance fees can be quite costly:  for instance, Shatner’s is reportedly $50,000, and Butch Patrick’s varies between $5000 and $10,000.  These celebrities subsequently spent their weekend lucratively shaking hands, signing autographs, appearing in fan photographs, and meeting fans in exclusive meet-and-greets (e.g., a photograph with Shatner was $75, Gene Simmons was $100, and one with the cast members of The Walking Dead was $175).

The clearest FandomFest signal that geekdom has expanded beyond a handful of social introverts may have been delivered by The Walking Dead fans, who descended on the convention center in long lines of zombie t-shirts waiting to see the likes Daryl, Merle, Herschel, and T-Dog.  For conventioneers, FandomFest’s story was about its disorganization in the face of such popularity.  The apparent onslaught of 20,000-30,000 fans (depending on the account) forced the Fire Marshal to close the exhibit hall on Saturday at the height of the convention as endless lines of fans awaited their 30 seconds of face time with a star and became increasingly testy.  Those stars were apparently immensely patient with convention disorganization—John Barrowman tweeted from the airport wondering if somebody was going to meet him, and Colin Baker sat in his hotel room wondering if he was appearing in a panel.  Yet the bigger story may be the convention’s powerful reminder of the mass popularity of geek fandom and its inseparability from corporate marketing.  Corporate interests now shape conventions as oblique if not unabashed advertisements and market testing and not simply social gatherings of fans.  Conventions have become part of a network of marketing mechanisms that include web pages, consumer goods (e.g., toys, clothing, DVDs), and the media commodities themselves.

Contemporary fan cultures are often cast by scholars as self-empowered digital collectives defying corporate symbolism, and fans in Louisville did push back against FandomFest’s organization and perhaps aspired to secure control of their fandom passions.  Twitter was among the social media that allowed digitized geeks to instantly register their discontent from the Louisville hallways.  Twitter was the first wave of geek anger, and a reddit complaint page appeared nearly instantly as well as storify summaries by Pure Geekery and Kentucky Geek Girl; a facebook group followed, FandomFest Louisville 2013 was a fiasco; there was some local TV coverage (WHAS 11 story here); and of course blog posts from participants including The Hobbit Hole, Pure Geekery (plus a follow-up), Alex Mom Cat’s Gateway Book Blog, Tosche Station, and Kentucky Geek Girl.  Despite all these sometimes-eloquent and often-clever rants about the FandomFest experience, the geek digital response does not target the corporate dimensions of media fandom or necessarily even contest it: that is, much of the geek unhappiness is with the concrete organization details of one convention, which in most cases only implicitly illuminates the way consumer interests profoundly transform media fandom.

Digitization fueled the ascent of The Walking Dead, Firefly, and similar fandoms in the first place, but it simultaneously thrust passionate fan expressions like comics and anime into corporate space where they became commodities that have not always obeyed the desires of their fans.  The digital culture that allowed FandomFest conventioneers to immediately review William Shatner’s comments and vent about the convention’s line management also provides an insidious corporate mechanism to penetrate fan communities and ethnographically assess fandoms from their very digital midst.  In a dystopian imagination, FandomFest may represent simply one modest yet symptomatic breakdown of a profit-driven recasting of geek fandom that risks reducing geek passions to expensive 30-second interludes with a weary star.

2010 Fandom in the Digital Era.  Popular Communication: The International Journal of Media and Culture 8(1):84-95.  (subscription access)