Riding the Color Line: A Century of Race and Cycling

Last week The Grio examined the impact of the color line on contemporary cycling, a discussion that reaches back to cycling’s primal 19th-century moments.  On the one hand, there is an enormous amount of evidence confirming that American cyclists have always included people of color, and a 2013 study on cycling and diversity confirms that cycling’s demographics reach well beyond the caricature of lycra-clad White bourgeois.  The Grio’s article covered familiar ground, and it could well describe nearly any collective of riders attracted to cycling for its health effects, competition, and sociality.

On the other hand, though, myriad cycling clubs, national advocacy groups, and the elite levels of American cycling underscore the way the color line persistently shapes the mundane realities of bike riding.  The discussion of race and cycling reveals deep-seated anxieties about diversity in cycling circles, and it reaches from the elite levels of the sport to grassroots recreational riders.  The discourse on color and cycling is not at all unique; instead, it is symptomatic of everyday racial divides reaching from sport to houses of worship that Americans have historically ignored or avoided. END_OF_DOCUMENT_TOKEN_TO_BE_REPLACED

Grime and Place in Luther’s London

Numerous movies and TV shows have cities as their backdrop, but the most compelling urban narratives feature the city as a sort of character unto itself.  Few cities are more fascinating stages than London, which is awash with iconic landmarks—Big Ben (i.e., the Elizabeth Tower) is an instantly recognizable backdrop for the city if not the UK; Tower Bridge is a commonplace framing shot for London; and double decker buses and black cabs have become aesthetic code for cinematic London.  However, BBC’s dystopian crime drama Luther paints London as a distinctively dirty and dark city, avoiding most of the exhausted symbols of the UK capital and instead imagining London as a grey, eroding, and grimy place.

The very first episode of Luther opens in the abandoned KTR Medico warehouse, which the script defines as “A DECAYED, POST-INDUSTRIAL STRUCTURE.  Wasteland.”  Series creator Neil Cross acknowledges that the series’ intent “was that London would be one of the series’ most important characters,” but Luther’s London is distinctively dark and dirty, mirroring the series’ harsh tale of brilliant if psychotic serial killers and a police detective that is uncomfortably like them.  Vulture’s Matt Zoller Seitz described the Luther settings as a “comic-book-noir” aesthetic that places the familiar tortured detective story in a place akin to “Gotham City, or perhaps Frank Miller’s Sin City, which Luther’s debased, grim London often resembles.”  USA Today likewise suggests that exchanging John Luther’s dark tweed and “steely, brooding façade” make Luther “London’s own Batman.”   Indeed, Luther is somewhat of a comic aesthetic in its inflated ambition to paint reality in its most grimy dimensions, and BBC One has even produced graphic novel images for the show.

Every metropolis is inevitably a dirty place, but the undersides of city filth have often been represented in popular culture as spaces of stereotypical squalor removed from the city’s heart.  Ellen Handy’s 1995 study of visualizations of Victorian slum life argues that the realities of urban filth such as human excrement rarely if ever appeared in photographic or literary tales of the city’s underside; the symbols of filth were often considered unspeakable, implied rather than represented.  In 1851 Lord Palmerston addressed the Royal Agricultural Society and told them that “I have heard a definition of dirt. I have heard it said that dirt is nothing but a thing in a wrong place.”  Mary Douglas made much the same definition famous in her 1966 classic Purity and Danger, in which she referred to dirt as “matter out of place.”  Luther certainly is only one example of the popular discourses that have counter-intuitively turned the banal and unsightly into an arresting aesthetic of displaced things.  For instance, the flickr page for the 2011 Wellcome Collection exhibit Dirt: The Filthy Reality of Everyday Life includes a breadth of abandonment images placing forlorn things in odd places. END_OF_DOCUMENT_TOKEN_TO_BE_REPLACED 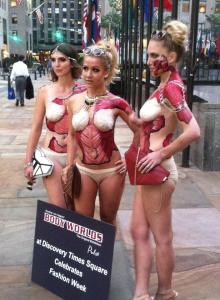 Last week Times Square hosted a fashion show of sorts at which three models were decorated as anatomically correct, partially de-fleshed bodies.  A day was spent body painting the models with exposed muscles, nerves, circulatory systems, and skeletal elements that rendered them walking anatomical textbooks.  Artist Danny Quirk’s inspiration for the Times Square performance was the Body Worlds exhibit, a display of artistically preserved dead bodies.  The models were walking advertisements for the exhibit at the Discovery Times Square Museum.  Body Worlds complicates facile definitions of death and the corpse, clouds the distinction between entertainment and edification, and underscores the symbolic power of the dead body that has long been clear to archaeologists.

Body Worlds is a series of exhibitions of actual dead bodies preserved through a process called plastination, which replaces bodily water and fat with plastics.  The plastinated bodies can be posed in a vast range of imaginative dissections revealing a variety of internal organs and structural features in prosaic activities (e.g., bodies playing poker) and impossible human positions (e.g., a runner with partially detached muscles).  The plastination technique was developed in 1977 by Gunther von Hagens, who has managed the Body Worlds exhibitions since their first showing in Tokyo in 1995.  The Body Worlds exhibit in New York, which is one of 11 Body Worlds exhibits now, includes a muscular gymnast, a flayed man holding his skin, a pregnant woman with a five-month old fetus, and a smoker with exposed blackened lungs among the preserved corpses greeting visitors.

Quirk’s breathing anatomical specimens and Body Worlds’ aestheticized corpses reinforce archaeologists’ understanding that few artifacts are more compelling than the human body.  Yet Body Worlds brings death into the open without actually speaking its name.  Instead, it invokes a narrow notion of education, a detached scientific rationality, and a candid curiosity about bodies and mortality.  Body Worlds is partly a shallow public health and anatomical lesson and partly an artistic exhibit in which the elements of the works are plasticized flesh and organs. END_OF_DOCUMENT_TOKEN_TO_BE_REPLACED

The online announcement for the NWA “ghetto fabulous” yoga class.

Last week a Santa Barbara yoga studio devised a novel event called “NWA” (that is, Namaste with Attitude), which they promised would be “ghetto fabulous.”  The Power of Your Om (POYO) yoga studio conjured an awkward constellation of color and class caricatures in its pledge to provide “the sounds of Snoop, Nate Dogg, Warren G, Coolio and many more faves.   Serious attitude, guaranteed belly laughs and various costumes to be provided.   Please come dressed in your favorite ghetto fabulous outfit, snap-back caps, corn rows, heavy lip liner or whatever you can dream up.”  For those Santa Barbarans uncertain of their “ghetto” credentials, the studio provided do-rags and included a link to a Wiki page explaining how to be “ghetto-fabulous.”  Their facebook page afterward included a host of images of glistening White suburbanites flashing gang signs in a clumsy imagining of “ghetto.”

The California yoga studio is hardly alone for its naive ghetto fantasy, borrowing popular caricatures invoking style, color, impoverishment, and class.  While a handful of Santa Barbarans were sweating to Snoop, the web site Ghetto Tracker was unveiled with the promise to identify “which parts of town are safe and which ones are ghetto, or unsafe.”  Ghetto Tracker assesses the perils of particular places based on user reviews, which of course does not map any concrete patterns as much as it maps class and color assumptions, impressions, and stereotypes.  Ghetto Tracker is not alone among websites and phone apps linking local geographies to criminality:  the SafeRoute app includes crime statistics for certain neighborhoods; and Road Buddy likewise uses crime stats to chart what it defines as the safest travel routes.  The novel wrinkle in Ghetto Tracker is its projection of racial imagination onto the landscape, allowing users to place their passing impressions, isolated experiences, and unacknowledged xenophobia onto social maps.  Numerous pages provide exceptionally detailed geographies of crime—SpotCrime, for instance, plots crime reports by type and location almost instantly—but Ghetto Tracker is a telling if unsettling reflection of how people perceive particular places. END_OF_DOCUMENT_TOKEN_TO_BE_REPLACED

Cannibalizing Suburbia: Storage Wars and the Ruins of Affluence

Few reality TV shows are as fascinating and simultaneously unsettling as Storage Wars.  Each week a circle of misanthropic auction hunters journey to a self-storage facility and bid on unidentified heaps of suburban detritus abandoned by our neighbors.  What is perhaps most compelling about the premise—beyond the real but largely superficial curiosity about the valuables that may potentially lie in any given storage space—is the show’s unsettling picture of material cannibals picking over the remains of middle America. 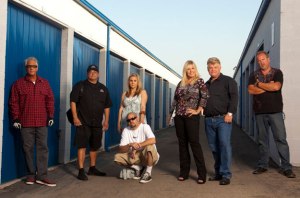 A rapidly increasing volume of domestic things appear to have found temporary refuge in self-storage facilities as families become overwhelmed by their goods, clean out parents’ homes, divorce or marry, downsize, or are foreclosed.  Storage Wars may testify to the overflow of middle-class homes, but it simultaneously captures the myopic optimism that households believe their things will find a place.  Storage Wars seems to confirm that the once-transitional nature of self-storage has now seen units transformed into permanent repositories, many of which are eventually forgotten or abandoned and sold off at public auction.

Conscious that most storage assemblages are an array of overwhelmingly worthless household things, Storage Wars nevertheless winks at us to enjoy the fantasy that abandoned storage spaces may be treasure chests of forgotten lucre.  To suggest that the florescence of self-storage units reflects an amazing over-accumulation of things is to simply make a thinly veiled moral judgment about our misplaced attachment to stuff.  Likewise, at some level Storage Wars shines an unflattering light on over-consumption, but the more interesting question it raises is why do we keep this stuff at all?  Storage Wars reveals things people did not or could not part with, irrationally paying storage fees that make the spaces’ eventual abandonment even more mystifying. END_OF_DOCUMENT_TOKEN_TO_BE_REPLACED

At Katsucon in Washington (image from Fred Dunn)

For those interested in a summary of my posts on “geek culture,” I have a piece The New Normals: Geek Style and Consumer Culture that appears today on PopAnth.

For more details, see my earlier posts on Geek Subculture including pieces on Geek T-Shirts, Cosplay and Geek Subculture, Walking Dead Fandom, and the Marketing of Doctor Who.

A week ago the MTV Video Music Awards celebrated an array of over-the-top visual, bodily, and stylistic performances.  The most self-righteous moralizing has been reserved for Miley Cyrus’ awkward entrance into adulthood celebrated with teddy bears, Beetlejuice, and vinyl hot pants, but the collective event staked a clumsy claim to authenticity that has often dogged musicians in particular and subcultures in general.  To be authentic implies originality, distinction, and stylistic innovation that springs from a sort of essentialist notion of human experience and raw talent, which is confirmed in “live” performance moments like the VMAs.  Two moments at the VMAs—one the celebrated Miley Cyrus dancing sequence, the other focused on the stylings of a member of One Direction–revolve around that ambiguous authenticity and contemporary musical performance.

Musical authenticity has always been closely linked to live performance, but judgmental observers charge that the death rites to such authenticity have been delivered by the likes of MTV.  Hannah Montana’s galavant about the Barclay’s Center stage aspired to seem a relatively spontaneous performance reflecting her essential musical skills and instincts, but of course it was as choreographed and constructed as Lady Gaga’s performance moments before Cyrus.  A chorus of voices have labeled the Cyrus performance raunchy, crass, or immoral, but Cyrus herself celebrated the fevered discussion—and may even have captured the irrelevance of “authenticity”–when she tweeted that “My VMA performance had 306.000 tweets per minute.  That’s more than the blackout or Superbowl!  #fact.”