← Dead Bodies and Archaeological Corpses: Aesthetics and Body Worlds
Riding the Color Line: A Century of Race and Cycling →

Grime and Place in Luther’s London 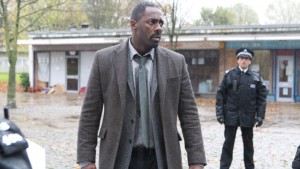 Numerous movies and TV shows have cities as their backdrop, but the most compelling urban narratives feature the city as a sort of character unto itself.  Few cities are more fascinating stages than London, which is awash with iconic landmarks—Big Ben (i.e., the Elizabeth Tower) is an instantly recognizable backdrop for the city if not the UK; Tower Bridge is a commonplace framing shot for London; and double decker buses and black cabs have become aesthetic code for cinematic London.  However, BBC’s dystopian crime drama Luther paints London as a distinctively dirty and dark city, avoiding most of the exhausted symbols of the UK capital and instead imagining London as a grey, eroding, and grimy place.

The very first episode of Luther opens in the abandoned KTR Medico warehouse, which the script defines as “A DECAYED, POST-INDUSTRIAL STRUCTURE.  Wasteland.”  Series creator Neil Cross acknowledges that the series’ intent “was that London would be one of the series’ most important characters,” but Luther’s London is distinctively dark and dirty, mirroring the series’ harsh tale of brilliant if psychotic serial killers and a police detective that is uncomfortably like them.  Vulture’s Matt Zoller Seitz described the Luther settings as a “comic-book-noir” aesthetic that places the familiar tortured detective story in a place akin to “Gotham City, or perhaps Frank Miller’s Sin City, which Luther’s debased, grim London often resembles.”  USA Today likewise suggests that exchanging John Luther’s dark tweed and “steely, brooding façade” make Luther “London’s own Batman.”   Indeed, Luther is somewhat of a comic aesthetic in its inflated ambition to paint reality in its most grimy dimensions, and BBC One has even produced graphic novel images for the show. 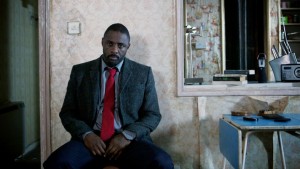 Every metropolis is inevitably a dirty place, but the undersides of city filth have often been represented in popular culture as spaces of stereotypical squalor removed from the city’s heart.  Ellen Handy’s 1995 study of visualizations of Victorian slum life argues that the realities of urban filth such as human excrement rarely if ever appeared in photographic or literary tales of the city’s underside; the symbols of filth were often considered unspeakable, implied rather than represented.  In 1851 Lord Palmerston addressed the Royal Agricultural Society and told them that “I have heard a definition of dirt. I have heard it said that dirt is nothing but a thing in a wrong place.”  Mary Douglas made much the same definition famous in her 1966 classic Purity and Danger, in which she referred to dirt as “matter out of place.”  Luther certainly is only one example of the popular discourses that have counter-intuitively turned the banal and unsightly into an arresting aesthetic of displaced things.  For instance, the flickr page for the 2011 Wellcome Collection exhibit Dirt: The Filthy Reality of Everyday Life includes a breadth of abandonment images placing forlorn things in odd places. 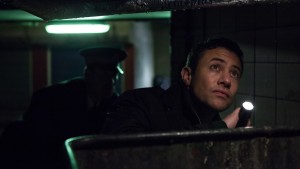 Much of Luther’s detective work is in dark or underground recesses, here being investigated b Detective Justin Ripley (BBC America)

This notion of dirt is a description of a specific form of waste that has lost or exhausted its purpose and has now become a social problem.  Popular culture routinely depicts urban disorder, but it typically links filth to impoverishment in marginal spaces.  Luther represents a dimension of dirt that is not especially lethal and does not really provoke anxiety in the same way as sewer waste, communicable disease, and “slum life.”  Luther’s grimy London is instead a distinctive aesthetic surface blanketing the city, a patina of filth whose colors are further obscured by the London fog.  In some critical ways, the overdone London landscape lends the tale a measure of apparent authenticity lacking in the legion of costume dramas and spy thrillers set in a fictitiously beautiful London.

Luther’s London is coated with a thin layer of age, a patina reflecting its exposure to the distinctive aging that is inflicted by urban elements.  This is dirt construed as style, a style that does not invoke specific dimensions of heritage as much as it underscores the city’s transformations across time.  London makes an especially powerful stage to illustrate the damaging march of urban time:  after millennia of occupation, the city has witnessed wars, disasters, massive populations, complex spatial transformations, industrial pollution, and the meteorological toll of the south of England. 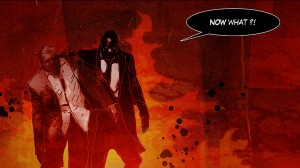 Luther as imagined in a BBC graphic novel (BBC)

Yet in Luther London is not simply dirty; in the words of the New York Times’ Terrence Rafferty, John Luther’s London “looks inhospitable, nearly uninhabitable.  Luther lives in a grim high-rise, in an unfashionable part of town, the better perhaps to bring the even meaner streets in which he works home with him.  This London—soulless, anonymous, thoughtlessly modern—is the very image of a 21st-century abyss.”  This aesthetic may be especially powerful in Americans’ imaginations, who have a vision of London as the province of costume dramas and Victorian crime tales and seem to see the city’s underside simply as a heartwarming Dickens’ holiday tale.  Indeed, The Guardian’s Stuart Heritage countered many American critics’ focus on the London aesthetics when he somewhat mysteriously argued that Luther “represents storytelling on a scope that isn’t often attempted in this country.  It makes London look beautiful.”

Luther’s grey landscape contrasts with Dexter’s sunny Miami, but both share a newly common fascination with the violent anti-hero who has our sympathy (e.g., Tony Soprano, Walter White).  All of these series paint a grim scenario against an aesthetically compelling place, like the Soprano’s mundane New Jersey suburbs and Breaking Bad’s stark Albuquerque.  Such series all manufacture a cinematic sense of place much like the one urban planners aspire to fashion; ironically, popular culture may do this especially effectively because it focuses on aesthetics.  TV shows and movies simply aspire to evoke some plausible sensory dimensions of London, but it inevitably is challenging to capture the chilly wind off the Thames, the eroding city infrastructure, the persistent chill of cold rain, the mysterious fluids that gather into London puddles, or the odors wafting from one neighborhood to the next.

Luther’s premise of a brilliant if deranged detective who may be worse than the criminals he pursues is perhaps not especially novel.  The picture of London as a city suffocating beneath a layer of material grime that symbolizes the evil on its streets is likewise rather shallow.  The devastated city in permanent decline may be a hackneyed cinematic image of the city, so Luther risks reproducing our caricatures of the recesses of the urban metropolis.  Nevertheless, the tale is fascinating precisely because it is not at all a narrative of complicated people in a world without clear right-and-wrong: Luther is not about subtle storylines but is instead intent on painting an evocative if dark picture of personalities like John Luther and London.

1966 Purity and Danger: An Analysis of the Concept of Pollution and Taboo.  Routledge, London.

1960 The Image of the City.  MIT Press: Cambridge, Massachusetts.

← Dead Bodies and Archaeological Corpses: Aesthetics and Body Worlds
Riding the Color Line: A Century of Race and Cycling →