Much of the lure of archaeology rests in the seduction of things: we are fascinated with the texture, color, heft, and odor of material artifacts that invoke antiquity, the allure of the alien, and the sensory richness of material life.  Yet we often cannot physically experience artifacts that are in distant places, and many objects are too fragile to be handled.  A variety of technologies now make it possible to produce exceptional 3D digital models of artifacts that can be rendered as visual and even material recreations: now archaeologists can visualize or handle a perfectly accurate scale model of, for instance,a 20th-century cap gun, a butchered dolphin bone from Jamestown, a Roman oil lamp (this example is from a 17th-century context at Jamestown), or an effigy pipe, all scanned by Virginia Commonwealth University’s Virtual Curation Laboratory and included in their Virtual Curation Museum. 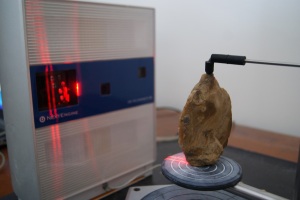 For archaeologists, much of the attraction of 3D artifact scanning is its documentation of artifacts in distant repositories; scanned artifacts can be accessible to scholars even if they remain in private hands; and virtual documentation can assist us in conserving especially fragile things.  Increasingly more archaeologists are no longer wedded to the expectation that their career rests solely on digging sites that are “theirs”; instead, increasingly more of us are working with museum and archival collections, and 3D artifact scanning would allow increasingly more work with curated collections in distant places.  Nevertheless, some of the most interesting implications of 3D scanning may be the new “artifacts” it produces in the form of scans and recreated objects and the ways these digitized things illuminate what archaeologists and audiences consider to be “authentic” artifacts.

Virginia Commonwealth University’s Virtual Curation Laboratory has been doing 3D scanning of artifacts, a project directed by Bernard Means with the support of the Department of Defense’s Legacy Program.   The artifact images are hypnotically revolving, oddly colored, otherwise familiar things like animal skeletons and arrowheads.  The images force us to look at material things as though they are once more novel: the scans may be less about documenting an object than they are about re-visualizing things.  Ironically, archaeologists often do not see things with much reflection, especially those items that are most common in the archaeological record; instead, we see a faithfully memorized style or a functional form to be counted and placed into perpetual storage.  The scans register detailed material form that is not readily perceived by the naked eye, so at some level the technology itself draws our sight to the object in a new way.  At another level, though, the mundane thing is rendered into something quite visually novel when it becomes a visual representation slowly revolving on our computer screen.

Perhaps the most fascinating products of the scan research are the 3D reproductions, plastic replicas of artifacts produced with a 3D printer.  At last week’s Society for American Archaeology conference, Laura Galke’s poster presentation on the archaeology of George Washington’s boyhood home Ferry Farm included a sample of plastic replica wig curlers from the site.  Recovered in immense quantities, some of the wig curlers were reproduced for the SAA presentation, and the distinctive reproductions seemed to be magnets for curious archaeologists.  The single-colored objects are exceptionally light, they lack much distinctive texture, and they seem to have no genuine smell:  they are distinctive material presences reproducing a real artifact but having almost no attributes, which oddly forces us to question what they are. 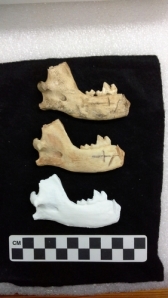 For some viewers and certainly some archaeologists, the reproductions are symbols of technological wizardry, and while they have some genuine teaching applications they seem at least initially perceived as things that are neither genuine artifacts nor “fakes.”  Archaeology rests much of its authoritative voice on the authenticity of excavated things, but the 3D models and images are utterly “real” in their dimensions even if they are quite clearly reproductions.  The implications of 3D scanning as both pedagogical and research mechanism extend beyond the philosophical question of whether the plastic reproduction is an artifact unto itself, a symbol of the real, or some hybrid.  Many archaeologists are fixated on handling the excavated object, ideally dug up under their own direction, but this is becoming an increasingly untenable position: repositories around the world hold enormous collections of excavated artifacts, many of which remain unreported if not unanalyzed long after their excavation.  Potentially any archaeologist may one day be able to produce ambitious comparative studies from the comfort of their own office untroubled by the demand to raise travel funds or conduct a time-intensive and costly field excavation.  The moment when global collections are so accessible may be well away from us at the moment, but as increasingly more collections are available in a variety of digitized forms there are some profound implications for how we practice archaeology that will move beyond the primal field experience and an authentic artifact as one freshly excavated.

2013 Virtual Artifact Curation of the Historical Past and the NextEngine Desktop 3D Scanner. Technical Briefs in Historical Archaeology 6: 1–12