← The Elevated Eye: Drones and Gaze in Ruins
If Things Could Speak →

In 1970, African-American engineer Adel Allen testified before the United States Commission on Civil Rights about his experience as one of suburban St. Louis’ earliest Black residents.  Allen circumspectly assessed the police services he initially received in his otherwise White suburb of Kirkwood, concluding that “I think we got more police protection than we required when I first moved there.  I don’t know if they were protecting me or protecting someone from me.”  Allen related experiences with the police that ring familiar today, indicating that “I don’t think there’s a black man in South St. Louis County that hasn’t been stopped at least once if he’s been here more than 2 weeks. . . .There’s an almost automatic suspicion that goes along with being black. . . . I’ve been stopped, searched, and I don’t mean searched in the milder sense, I mean laying across the hood of a car. And then told after they found nothing that my tail light bulb was burned out, or I should have dimmed my lights, something like that.” 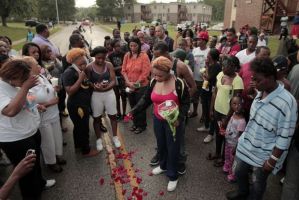 Adel Allen’s experience underscores the tense, long-term relationship between police and the color line, and perhaps it is tempting to conclude that his story might now be considered a historical aberration.  However, not far from Kirkwood over a half-century after Allen moved to St. Louis, Michael Brown’s death has complicated the American imagination of public space and the color line.  That landscape is perhaps most uncomfortably evoked by the otherwise prosaic suburban street where Brown’s body lay for nearly four hours after he was shot August 9th.  The stretch of Canfield Drive where Brown died has become part of an informal memorial landscape, with an array of idiosyncratic things placed along the street by a steady stream of visitors.  The spectacle of Brown’s body on the non-descript street captures much of the tensions with local police, but the spontaneous memorialization of the Canfield Drive landscape—and resistance to it–provides an especially interesting insight into the ways we discuss race and public space.

The memorialization of the spot where Michael Brown fell illuminates the Black experience of state racism and extrajudicial punishment, but some observers want Canfield Drive to again become invisible.  Many commentators simply rationalize Brown’s shooting, and some reduce the August encounter to an anomaly in an otherwise equitable society.  Asking how society should remember this stretch of pavement beyond the aftermath of Brown’s death—or if we should publicly remember it at all–asks how (or if) we should materialize landscapes of racism and death.

Jack Santino approaches such “spontaneous shrines” as commemorative mechanisms placed in the public landscape to promote genuine social activism.  Erika Doss has examined the increasing popularity of memorials of shameful histories, but Canfield Drive breaks from many of those somewhat more conventional memorials: in a departure from conventional Black commemorative landscapes, Brown’s makeshift assemblage of stuffed animals, flowers, and signs tenaciously holds onto the middle of the street, dragging an acknowledgement of anti-Black violence into the most public yet unexamined of all spaces, the suburban roadway. 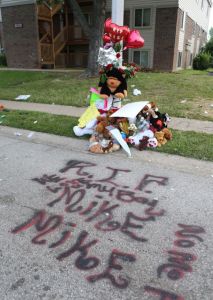 Most of the history of Ferguson is absolutely typical of the shifting color line in postwar American cities (see Richard Rothstein’s The Making of Ferguson).  Once known as a “sundown town” (that is, Blacks were expected to leave the community after the sun set), Ferguson’s main road to the adjoining Black community of Kinloch was physically blocked into the 1960s.  A few African Americans moved into Ferguson in the 1960s, and in 1970 less than one percent of Ferguson’s population was Black.  In 1975 the federal government required a circle of racially segregated communities including Ferguson, Kinloch, and Berkeley to integrate.  In 1980 Ferguson was still just 14% Black, but two decades later it was 67% Black.

Material trinkets began to be spontaneously placed in the middle of Canfield Drive when Michael Brown’s body was removed sometime around 3:30-4:00 on August 9th.  By that evening Mother Jones reported that flowers and candles occupied much of the middle of the street, and another impromptu memorial was on the streetside with stuffed animals and signs.  The police appear to have almost instantly hoped to discourage visits to the site by removing material memorials from the street.  When St. Louis County police arrived with a K-9 unit, the police apparently allowed one of their dogs to urinate on the memorial, and that evening just after 10:00 St. Louis Alderman Antonio French tweeted an image of the street memorial space after it had been emptied by the police.

Nevertheless, a memorial clung to the center of the street, and a month later roses were sprinkled in a long line along the street leading to a memorial that remained firmly situated in the spot Brown fell.  In September a neighbor voiced support for a permanent memorial, indicating that “Instead of a stain on the pavement, Michael Brown needs to be a mark on history. . . . This has become a sacred site for people here.  We’re afraid the city will send a truck some night and just scrape it off the street.”

The streetside memorial burnt at dawn on September 23; the origin of the fire was not clear (despite a rumor that it smelled of gasoline), but it had been reconstructed by noon.  On Christmas evening the Brown memorial in the middle of Canfield Drive was destroyed by a car, and once more the memorial was reconstructed within a few hours.  When The Washington Post called the Ferguson police for their comments about the Christmas Day episode, their disinterested public relations officer (with connections to the officer who shot Brown) responded that “I don’t know that a crime has occurred. . . . But a pile of trash in the middle of the street? The Washington Post is making a call over this?”  (The Ferguson Police have since disputed the accuracy of the Post‘s quote and suggested a willingness to “find a better location for the memorial”).

Just got to #MikeBrown memorial and it's been ran over. Someone who saw it on video said it was intentional. http://t.co/UlR2TGSxCS—
J. Meless (@jay_myles2) December 26, 2014

The Ferguson Police Department’s effort to reduce the Canfield Drive space and memorial to “trash” repeats a common refrain of online critics eager to return Canfield to anonymity.  On December 26th a typical comment online at the St. Louis Post-Dispatch concluded that the memorial “is litter, the city street dept. needs to remove it.  Most memorials only are up around a month….maybe 2. Wonder if subdivision ordinances allow litter in the street for 6 months?”  In the midst of the awkward defenses of public safety on Canfield Drive, more virulent observers masked in online anonymity unleash predictable if chilling commentaries on Michael Brown and the color line.

Mike Brown's memorial looks like so many others #blacklivesmatter

The common thread to these commentaries may be their shared fantasy that Canfield Drive is a public space governed by equitably applied civic ideals, and the stuffed animals and flowers in the middle of the Ferguson suburb challenge those ideals in practice.  The offerings at the street memorial do not appear to be significantly different from those Holly Everett has inventoried at roadside memorials, which are most commonly decorated with flowers, stuffed animals, notes, and personal items linked to the deceased.  In his interviews with 309 individuals who contributed to 127 roadside memorials, Art Jipson found that every single person he interviewed believed that the makeshift memorial was more meaningful than the gravesite itself, regardless of the seemingly innocuous things at the memorial.  Most of these items are indeed impermanent and likely understood to be things that will be consumed by time and nature, which requires returned visits to the space.

Perhaps the most interesting parallel to the memorialization of people like Michael Brown and Eric Garner is the landscape of lynching.  It would not seem difficult to express public shame and contrition for lynchings, but of the thousands of people killed in lynchings, only a handful have any memorial markers.  It includes places like the central square in Springfield, Missouri, where in April, 1906 three men were dragged from the jail and over 2000 people watched as the men were hung from an electric tower topped by a Statue of Liberty replica.  In 2002 a modest plaque was finally placed near the spot where Will Allen, Horace Duncan, and Fred Coker were hung and set ablaze.  In 2011 a marker was installed in Greenville, South Carolina for the 1947 lynching of Willie Earl.  Among the last of the South’s lynchings, Earl’s murder resulted in a trial against his lynch mob but all of the 26 participants brought to trial escaped being found guilty.

Nevertheless, many more such places remain clouded in public memory, the event distorted in local memories and its concrete place on the landscape obscure or simply lost.  For instance, in August 1930 Thomas Shipp and Abram Smith were taken from a jail in Marion, Indiana, beaten by a crowd, and then lynched on the courthouse lawn.  Like many other lynchings, the extrajudicial violence was documented by a photographer who captured Shipp and Smith’s lifeless bodies in the midst of a crowd.  Lawrence Beitler’s image is among the most famous of all American lynching images, perhaps less stunning for the dead men swinging from the trees than for the crowd gathered around Shipp and Smith, shamelessly complicitous in their deaths.  It would seem impossible to find a more barbaric act around which a contemporary community might galvanize and recognize the most heinous of all racist acts, but the spot today remains unmarked.

In 2006 the Duluth News Tribune’s editor Robin Washington expressed his satisfaction with a 2003 memorial to a 1920 lynching of three Black men in Duluth, but he concluded that nationwide recognition of racist violence was too “gruesome.”  Washington argued that “Even if memorials are done with decorum, as in Duluth, I don’t know if there should be a marker at every site.  Four thousand, seven hundred forty-three memorials in town squares and highway rest stops would be a gruesome reminder across America.”

Washington is almost certainly correct that such a material landscape would be enormously challenging, but traumatic landscapes like the Marion courthouse lawn or Canfield Drive are rarely forgotten.  The Canfield Drive site of Michael Brown’s death and the temporary memorial may provide a productive if unsettling space to begin to discuss an unpleasant heritage of life along and across the color line.  That conversation has historically failed Americans, a point Adel Allen made in 1970.  After Allen related his experiences of police harassment, the Commission chairman was surprised and pressed Allen for details.  Allen seemed shocked himself that these experiences were unknown to the Civil Rights Commission, and he responded “But, I mean, this is nothing unusual for black people.  You seem amazed.”  Perhaps some of that unacknowledged experience of public space and the color line may be illuminated in modest places like Canfield Drive.

2009 Landscapes Interrupted: A Study of the Without Sanctuary Lynching Postcards.  Unpublished Master’s Degree, University of Delaware.

2008 Mapping Decline: St. Louis and the Fate of the American City.  University of Pennsylvania Press, Philadelphia.

2010 White Man’s Heaven: The Lynching and Expulsion of Blacks in the Southern Ozarks, 1894-1909.  The University of Arkansas Press, Little Rock.

2001 A Lynching in the Heartland: Race and Memory in America. Palgrave Macmillan, New York.

2014 The Making of Ferguson: Public Policies at the Root of its Troubles.  Economic Policy Institute, Washington, DC.

2004 Performative Commemoratives, the Personal and the Public: Spontaneous Shrines, Emergent Ritual, and the Field of Folklore. The Journal of American Folklore 117(466):363-372.  (subscription access)

Posted on December 27, 2014, in Uncategorized and tagged Ferguson, memorials. Bookmark the permalink. 8 Comments.

← The Elevated Eye: Drones and Gaze in Ruins
If Things Could Speak →