Tourists at Angkor (image from Poco a poco).

In February American tourists Lindsey Kate Adams and Leslie Jan Adams were among the crowds at Cambodia’s Angkor, the 9th-15th century Khmer city and temple complex that UNESCO hails as the most famous archaeological site in southeast Asia.  The World Heritage Site sprawls over about 400 square kilometers, making it among the world’s largest archaeological sites and one of the most visited historical sites in the world.  The Adams sisters were among the thousands of visitors trooping through Angkor in February, with scores of them providing pictures of their journey and the astounding complex.  When the Arizona sisters reached the Preah Khan temple, they likewise documented their visit, yet like a modest but growing wave of contemporary tourists they departed from the conventional monument pose:  the women dropped their pants for a shot of their butts in the ancient temple, only to be nabbed by the authorities.  These increasingly common nude or partially disrobed pictures at historic sites tell us something about the aesthetic power of heritage even as they reveal its irrelevance to many of the Western tourists who are actually visiting historic places.

The Arizona travelers are not alone in their ambition to commemorate their historic site tourism with nude pictures.  In January three French tourists were deported after being caught in Angkor’s Banteay Kdei temple stripping for pictures of their Cambodian trek.  Five days before pictures appeared on Facebook depicting topless women at Angkor as well as Beijing’s Forbidden Palace.  In May a group of ten tourists posed naked in Malaysia on Mount Kinabalu, a World Heritage site distinguished by its botanical diversity (5000-6000 plant species can be found on the mountain).  Israeli traveler Amichay Rab’s My Naked Trip blog documents his tour of South America, where he stripped at a series of sites including Machu Picchu, Cuzco, and Monte Verde.  The facebook page and blog Naked at Monuments document sun-starved butts at sites including the Great Wall of China, Machu Picchu, and Athens. END_OF_DOCUMENT_TOKEN_TO_BE_REPLACED

Boone Hall Plantation bills itself as “America’s most photographed plantation,” and the Mount Pleasant, South Carolina plantation’s moss-draped oak approach and grounds are indeed magnificent.  The most dramatic aesthetic feature of the plantation may be the nearly mile-long “Avenue of Oaks” approach, which is draped in southern oaks planted in 1743.  Photographed by a legion of tourists whose images crowd the likes of Pinterest, Instagram, and Trip Advisor, the space has also appeared in films including North and South and The Notebook.

In April the visitors photographing the Boone Hall landscape included Dylann Roof, who later murdered nine African Americans in a Charleston church on June 17th.  In March and April Roof visited a series of South Carolina historic sites such as Boone Hall and included the images on a website accompanying a racist manifesto.  We may find it impossible to fathom the mind of a racist killer and determine how he went from the mimicry of xenophobic talking points to mass murder, but his historic site visits illuminate the somewhat “placeless” historic landscape of the racist imagination.  Dylann Roof’s imagination of these historic spaces is impossible to conclusively interpret, and his online manifesto and pictures did not deny the historical narratives of African-American heritage sites as much as he simply evaded them.  It appears that Roof ignored the complex heritage of all these places even as he felt strangely compelled to visit them. END_OF_DOCUMENT_TOKEN_TO_BE_REPLACED

The Trinkets of Evil: Eva Braun’s Underwear and Dark Heritage

The underwear that may have once belonged to Eva Braun are $7500 (image from Daily Mail).

Few artifacts associated with dark historical moments are more perversely fascinating than a pair of panties for sale in an Ohio antiques shop.  The lace underwear embossed with the monogram “EB” were reputedly recovered in 1945 from Berchtesgaden, where they were said to grace Eva Braun.  The provenience for the $7500 knickers is not clearly established, but the interest in the skivvies of Hitler’s mistress is a telling reflection of our deep-seated curiosity in the human dimensions of evil.  The fascination with such a prosaic thing illuminates our desire to comprehend (if not explain) the most evil people by focusing on their banal humanity.

Few collectibles provoke more anxiety than Nazi artifacts, whose exchange is strictly regulated throughout most of the world.  Many of the codes regulating Nazi memorabilia attempt to keep them from falling into the hands of contemporary neo-Nazis, but many observers simply see the profiteering on Nazi symbols as ghoulish if not immoral.  Harry Grenville, whose parents died at Auschwitz, called a 2015 auction of wartime memorabilia “hugely offensive,” lamenting that “this auction house is set to make a tidy sum of money from the sale of items that are hugely offensive to a lot of people.  It raises again the question about freedom of speech – you can’t force people to stop selling Holocaust memorabilia and making money from it but you can deplore it.”  Grenville is not alone in his uneasiness that Nazi material things have become “collectibles” traded like any other other good.  Nevertheless, this aversion to the trade in Nazi collectibles stands somewhat at odds with the pervasive presence of Nazis in popular culture, where Nazism and Hitler are nearly universally recognized stand-ins for evil. END_OF_DOCUMENT_TOKEN_TO_BE_REPLACED 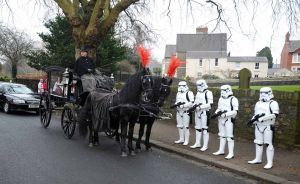 In February lifelong Star Wars and Liverpool Football Club fan Gordon Deacon died of cancer, and the 58-year-old’s funeral commemorated his passions.  The Cardiff father of four was escorted to St. Margaret’s Church by a phalanx of stormtroopers who then oversaw his pallbearers, who were themselves clad in Liverpool jerseys.  Deacon’s funeral was distinctive, but he is by no means alone embracing his fandom for his final earthly ritual.  For instance, the widow of Pittsburgh Steelers fan James Henry Smith requested that he be placed in his favorite reclining chair as if “he just fell asleep watching the game,” covered by his beloved Steelers blanket and facing a television showing a Steelers game (with the television remote in his hand).  When Doctor Who fan Seb Neale died his family and friends arranged a service at which Neale’s coffin was a TARDIS with a blue flashing light; the service program was a picture of Neale cosplaying as 10th Doctor David Tennant; music from the show was played; and instead of scriptural verses “the funeral consisted of quotes from classic Who scripts, including William Hartnell’s famous speech from `The Dalek Invasion Of Earth’: ‘One day, I will come back.  Yes, I shall come back.  Until then there must be no regrets, no tears, no anxieties.  Just go forward in all your beliefs, and prove to me that I am not mistaken in mine.’” END_OF_DOCUMENT_TOKEN_TO_BE_REPLACED