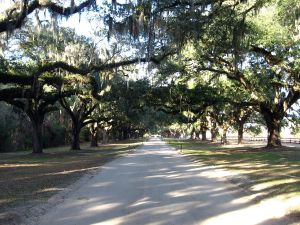 Boone Hall Plantation bills itself as “America’s most photographed plantation,” and the Mount Pleasant, South Carolina plantation’s moss-draped oak approach and grounds are indeed magnificent.  The most dramatic aesthetic feature of the plantation may be the nearly mile-long “Avenue of Oaks” approach, which is draped in southern oaks planted in 1743.  Photographed by a legion of tourists whose images crowd the likes of Pinterest, Instagram, and Trip Advisor, the space has also appeared in films including North and South and The Notebook.

In April the visitors photographing the Boone Hall landscape included Dylann Roof, who later murdered nine African Americans in a Charleston church on June 17th.  In March and April Roof visited a series of South Carolina historic sites such as Boone Hall and included the images on a website accompanying a racist manifesto.  We may find it impossible to fathom the mind of a racist killer and determine how he went from the mimicry of xenophobic talking points to mass murder, but his historic site visits illuminate the somewhat “placeless” historic landscape of the racist imagination.  Dylann Roof’s imagination of these historic spaces is impossible to conclusively interpret, and his online manifesto and pictures did not deny the historical narratives of African-American heritage sites as much as he simply evaded them.  It appears that Roof ignored the complex heritage of all these places even as he felt strangely compelled to visit them.

The “This is Sullivan’s Island” marker (image Historic Markers Database).

The timeline for Roof’s historical tour appears to have begun on March 16, when he visited Sullivan’s Island, a 4.3 mile-long island at the mouth of Charleston Harbor (compare the Daily Mail’s chronology).  He posed for a picture at the historic sign “This is Sullivan’s Island”—one of 48 historic signs on the island, most of which are focused on the island’s Revolutionary War and Civil War histories.  For instance, steps away from the sign Roof photographed is a sign for the Battle of Fort Sullivan, where American forces repelled a British effort to capture the island in June, 1776.  Sullivan’s Island was an arrival point for about 40% of British North America’s African captives, a history acknowledged by the 1999 sign with which Roof posed.  The sign notes that Sullivan’s Island was “A place where . . . Africans were brought to this country under extreme conditions of human bondage and degradation. . . . This memorial rekindles the memory of a dismal time in American history, but it also serves as a reminder of a people who–despite injustice and intolerance–past and present, have retained the unique values, strengths and potential that flow from our West African culture which came to this nation through the middle passage.”

In Roof’s Sullivan’s Island image he was wearing a jacket with the White-supremacist flags of Apartheid-era South Africa and Rhodesia (which became Zimbabwe in 1980).  As with all of Roof’s images, he was expressionless, and his web page apparently included no text references to the histories of any of the places where he posed.  Rather than refute the historical narratives of the places he visited (or romanticize their Confederate connections), he simply occupied the spaces with an impassive if not vacant stare into the camera.  However, his racist sentiments certainly were not concealed on his web page.  On the same trip he went to an island beach and scratched the numbers 14 and 88 into the sand; the former refers to the “fourteen words” (“We must secure the existence of our people and a future for white children”) coined by White supremacist David Lane, and the latter refers to the eighth letter of the alphabet and is shorthand for HH (“Heil Hitler”).

The 1951 gates to the Confederate veteran’s cemetery section at Elmwood Cemtery (image KudzuVine).

A little over a week later Roof ventured to the Elmwood Cemetery in Columbia.  Established in 1854, Elmwood has a section committed to Confederate soldiers’ graves that Roof included in his photographs.  The Confederate section of Elmwood includes an 1899 marker to unknown Confederate dead; a 1926 memorial for Confederate veterans who died in the Confederate Home in Columbia; a rostrum placed by the United Daughters of the Confederacy in 1935; an entry arch they added in 1951 (a feature that Roof photographed), and a 1985 marker to Confederate soldiers buried in unmarked graves.  Kristina Dunn Johnson’s No Holier Spot of Ground: Confederate Monuments & Cemeteries of South Carolina indicates that a turn-of-the-century inventory of Elmwood recorded 261 Confederate soldiers buried in the cemetery between 1862 and 1865, though only 174 were identifiable in 1985.  Each May Confederate Memorial Day is celebrated at Elmwood, with a procession from Elmwood to the South Carolina State House.

The “transition row” at McLeod Plantation includes structures that were homes to enslaved and emancipated African Americans (image from Charleston County Park and Recreation Commission).

On April 13 Roof went to Boone Hall Plantation, where he posed along the Avenue of Oaks as well as in front of the 1933-1935 Colonial Revival Mansion that is the most recent main house on the working plantation.  In one of the exhibits in the captives’ quarters Roof posed for a picture with two African-American mannequins in a historical diorama.  About a week later he visited McLeod Plantation, an 1858 plantation that opened as a museum this April.  On April 20th, The Post and Courier’s Robert Behre celebrated that McLeod was tackling the heritage of captivity, and the Charleston Parks and Recreation Commission director told the paper that “the commission is not concerned about the plantation’s message in a city where the Civil War remains subject to different interpretations.  `This agency has never hidden from controversy,’ he said. `I’m certain the stories here may not be to everybody’s liking. That’s OK. . . . I think we can be an instrument of healing, but it’s not going to happen by not being real.’”  When the plantation held its grand opening on April 25th, the newspaper proudly proclaimed that “the Charleston County Park and Recreation Commission isn’t offering magnolias and moonlight at McLeod.  Instead it has chosen to focus on the experience of black people who lived there from the pre-Civil War era to the late 20th century.” 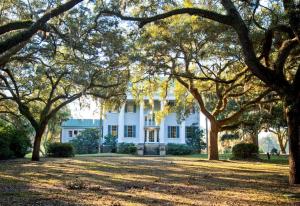 The new park was open to visitors on April 21st, and Dylann Roof apparently visited on April 23rd.  At McLeod Roof once more posed in a familiar kneeling crouch for pictures at the McLeod plantation house, on the grounds where the African-American 54th and 55th Massachusetts Volunteer Regiments camped after the fall of Charleston.  The local Freedmen’s Bureau was subsequently based at the plantation before the property was returned to the family in 1879.  Roof posed before the captives’ quarters at McLeod, and he included a picture of himself standing before the sign for the cemetery holding the enslaved who died at McLeod.

Roof’s historical photography tour appears to have concluded on April 24th when he visited the Museum and Library of Confederate History in Greenville.  The museum managed by the Camp 36, Sons of Confederate Veterans chapter is “dedicated to an accurate portrayal of the War for Southern Independence.”  Roof posed in front of the museum’s street sign and a range of Confederate flags, but as with his other stops he did not provide any commentary on the visit.

The interior of the captives’ quarters at Boone Hall Plantation (image Jan Kronsell).

Roof visited all these places in the months leading up to his mass murder at the Emanuel African Methodist Episcopal Church (see Corey McQuinn’s analysis of the Charleston Church’s history), yet he did not negate their histories by refuting the sites’ narratives.  Roof did not engage the critical histories told at Boone Hall, Sullivan’s Island, or McLeod Plantation, and his presence at Elmwood was at best a mute commemoration of Confederate dead with whom he perhaps fancied he had some affinity.  His screed accompanying his “The Last Rhodesian” web page had nothing to say about the specific places he visited; instead, it simply repeated stale racist rhetoric and may betray the desperation of White privilege in the hands of an unreflective thinker.  This is a somewhat different rhetorical approach than Confederate defenders and revisionists who weave historical fact and ideological biases into narratives that re-cast the war, the color line, and Southern heritage; Roof’s text for the most part simply railed on a host of non-WASP peoples.  Roof does allude to “an American [sic] to be proud of and fight for,” a nation that apparently existed in some moment before Vietnam, but like many White supremacists Roof’s shallow history romanticizes a segregated world and rails at the perceived erosion of White privilege.

Roof notes near the conclusion of his manifesto that “To take a saying from a film, `I see all this stuff going on, and I dont [sic] see anyone doing anything about it. And it pisses me off.’”  That quote from American History X may capture the desperation of racists, who are likely unsettled and angered by their experience at historic sites committed to challenging established ideological narratives.  Roof concluded his online statement noting that he “chose” Charleston for his rampage “because it is [the] most historic city in my state, and at one time had the highest ratio of blacks to Whites in the country.  We have no skinheads, no real KKK, no one doing anything but talking on the internet.  Well someone has to have the bravery to take it to the real world, and I guess that has to be me.”  This should remind us of the profoundly unsettling power of critical histories in the South and North alike.  Some committed ideologues may sometimes step beyond their online echo chambers, but as Charleston Parks and Recreation Commission director Tom O’Rourke said days before Dylann Roof visited McLeod,“we can be an instrument of healing, but it’s not going to happen by not being real.’”

I have included images of these historic sites because they deserve to be visited and should not have their missions’ derailed.  I have not included any images from “The Last Rhodesian” or links to Roof’s text, but they are of course available elsewhere.

Above: A member of the United Daughters of the Confederacy walks past the graves of Confederate soldiers during the May 2, 2015 memorial service at Elmwood Cemetery (Getty Images). 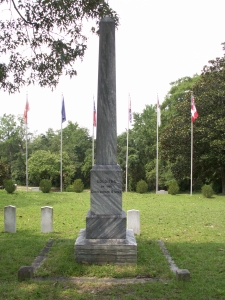 Corrections June 22 the spelling should be “Roof” not “Ruff”