In August 1956 the Indianapolis Star included this picture of the Blue Lake Trailer Park yard landscaped by its residents Forrest and Avis Marie Martin.

This piece was co-authored with Jonathan Howe, President of the West Indianapolis Neighborhood Congress

In August 1956 the winners of an Indianapolis yard beautification contest included Forrest and Avis Marie Martin of Blue Lake Park, a community at 3023 West Morris Street. Like many residents in the city’s southwestern suburbs, William Forrest Martin was a World War II veteran who moved to newly constructed neighborhoods that were expanding out from Indianapolis’ core. Forrest was a bulldozer operator for American Aggregates Corporation, a sand and gravel firm that managed a quarry on South Harding Street not far from the Martins’ home.

While much of the postwar generation moved into suburban tract homes, the Martins were among the many families who moved into mobile homes. Blue Lake Park had opened in 1954 as a “De Luxe Trailer Court” in a rather quiet area just west of Eagle Creek. The community was advertised as a “sportsman’s club” surrounding the modest Blue Lake, an old gravel pit like those Forrest Martin worked in on nearby Harding Street. Despite the proximity to West Indianapolis industries, the dump along South Harding Street, and Indianapolis Municipal Airport to the southwest, the 50-acre Blue Lake community promised an idyllic escape from the city: the tiny quarry lake offered boat docking and fishing privileges to its residents, city buses ran along Morris Street through West Indianapolis and into downtown, and adults hoping to escape children may have been glad to find the community did not allow any residents under 16 (or dogs).

Last August the current residents of the former Blue Lake Trailer Park received this eviction letter indicating they would be required to move in 60 days.

Blue Lake Park would remain home to more than 60 years of families until this week, after its landlords were permitted to evict all of the residents after an initial eviction notice in August 2019. Faced with a requirement to install 21st-century sewer connections, the owners balked at the expense and notified residents they had 60 days to move out. After contesting the eviction notice through the Fall, the Attorney General’s office resolved to award just over $50,000 in total payments for the residents’ homes, but the modest payments (one resident received $1200) cannot hope to fund moving and securing new housing. February 21st was the deadline for residents to move themselves if not their trailers or risk being physically removed by authorities. Mobile home communities are the nation’s most common unsubsidized form of affordable housing, with about 18 million people living in trailer communities, and the Blue Lake Trailer Park eviction is part of a national pattern of housing insecurity that comes down especially hard on impoverished trailer communities. 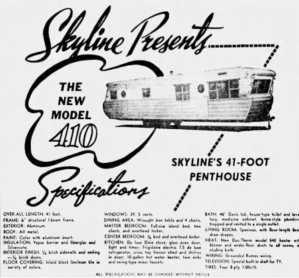 The 1954 “Skyline 410” was one of a host of trailers being advertised to Cold War home buyers.

Caricatures of trailer life repeat tired xenophobic stereotypes that hazard making displacement of trailer communities seem somehow acceptable, but this significantly distorts the history of trailer park communities. In November 1945 the Indianapolis Star’s columnist Joe Adams waxed poetic about trailers, observing that “Those bungalows a-wheel have a definite appeal to the gypsy in the urban resident; in your house you roll along like a lilting little song, and you never have to worry over rent.” Trailer cottages had indeed been the province of vacationers in the inter-war period, but after World War II larger mass-produced travel trailers emerged that were often left in a single location most of the year. Ten- and 12-foot wide trailers introduced in the mid-1950s could not be practically hauled by a passenger vehicle, and these larger trailer homes were nearly always intended to be permanent structures. Adams’ story of trailer life was inspired by a recently opened trailer community at 4403 South Madison Avenue, and like many of the city’s earliest trailer parks the South Madison park is still a trailer community today. These trailer park communities were exceptionally closely-knit. In 1950 the Indianapolis Star interviewed residents of the Lynd-Moor Trailer Park on South Lyndhurst Drive and found that a “big attraction for the women and the men, too, is a spirit of friendliness and neighborliness that pervades the typical trailer park.” The Lynd-Moor trailer community remains on South Lyndhurst Drive today. 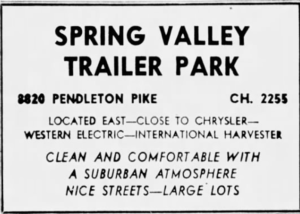 Like many of Indianapolis’ first trailer parks, the Spring Valley Trailer Park was home to a mostly working-class residency, and the community’s location near industrial workplaces was featured in this 1954 advertisement. The community remains a trailer park today.

Trailer parks emerged on Indianapolis’ margins in the immediate postwar period, which was relatively typical of many American cities. In the face of an enormous postwar housing crunch, trailers emerged as one form of relatively inexpensive mass-produced housing for mostly working-class communities (about 10% of trailer home residents in 1955 were retirees, typically moving their homes south for winter). In November 1947 the Trailer Coach Manufacturers’ Association claimed that 1 of every 145 Americans lived in a trailer, and 10,000 Hoosiers were reportedly residents of a trailer. In 1954 40 regional trailer parks held central Indiana’s first open house event featuring the laundries, recreation areas, and creature comforts offered by the newest trailer communities. A year later, FHA loans became available to trailer home buyers, and about 2 million American were living in trailer homes. Indiana rapidly became the producer of more house trailers than any other state in the union, and in 1950 about 40% of the nation’s trailer homes were produced in Indiana.

The Star indicated in 1947 that there were “about a dozen sizable parks around the Hoosier capital,” and those numbers swelled dramatically in the early 1950s. In 1960 the Indianapolis Suburban Directory identified 35 trailer parks (Marion County identified 32 trailer parks in 1952, and in 1954 an Indianapolis Star inventory of trailer parks in the region included 48 communities). Some have now disappeared, like the Eagle Motel and Travel Park at 4165 West Washington Street, Little Eagle Village (3802 Cossell Road, now only a streetscape without trailers), and Trailer City (7777 West Washington Street, which in the early 1950s built its own sewage treatment plant). Nevertheless, a surprising number of the postwar trailer parks remain today: the Morris and Tibbs Trailer Court (now Alton Mobile Home Park), the Spring Valley Trailer Park (8820 Pendelton Pike), South Town Trailer Park (5217 Madison Avenue), Lynd-Moor Mobile Home Park (3000 South Lyndhurst), Finch Trailer Court (8601 East Washington Street), Dunne’s Speedway Trailer Court (1818 Georgetown Road), and the Bullfrog Trailer Court (1326 South Lyndhurst) remain residential communities today. Morgan’s Trailer Park opened at 4923 Rockville Road in about 1939, making it one of the city’s earliest trailer communities, and neighbors petitioned to close it in August 1952, but it survived and eventually became the Garden City Mobile Homes Park, which remains a trailer community today known as Harrison Grove Estates.

In 1956 the earliest trailers were parked at the recently opened Blue Lake Trailer Park (at red arrow along West Morris Street), with Blue Lake to the south.

Blue Lake Park was in the midst of one of the city’s concentrations of trailer communities on the westside, where many of the longest-surviving communities remain today. The Blue Lake was a quarry beginning around 1930, and the quarry and Morris Street lot where the trailer park would be built was owned by the Eaton-Kaster Gravel Company in 1931. A 1941 aerial image of the area included no structures along Morris Street, which likely lay undeveloped until after the war. The quarry closed around war’s end, and channel improvement and subsequent levee construction along Eagle Creek cut off waterflow from the quarry and allowed the new Blue Lake to grow significantly in the early 21st century (compare Xiao Yang’s proposal for transforming the current-day Blue Lake).

In July 1954 the Blue Lake Sportsman’s Club hailed its fishing and lakeside amenities as well as trailer docking.

In May 1954 the Blue Lake Sportsman’s Club announced in the Indianapolis Star that it would soon be opening, heralding its lakeside amenities and patios and sidewalks with electricity, water, and sewer service. Its effort to exclude any residents younger than 16 reflected their anxiety that youth might drown in the Blue Lake quarry, and in June 1968 a 15-year-old did indeed drown in the quarry. By the time of the 1956 lawn beautification contest won by Forrest and Avis Martin, there were about 40 trailers in the West Morris Street lot, and in 1962 there were 82 trailers in the community; in 2019 the community had 75 lots. By 2019 the Blue Lake was fenced in as a result of industrial contamination of the lake. In 1973 some of the Blue Lake property had been re-zoned for excavation machinery storage, and two years later Blue Lake Inc. re-zoned the quarry to permit processing of “used foundry sand to reclaim metallic particles to sell and reuse.” 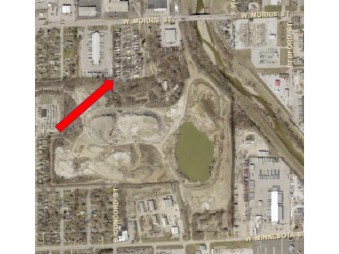 In 2019 re-channeling of Eagle Creek and levee construction drained much of the Blue Lake into Eagle Creek while the former quarry was being used to dispose of fill.

The contamination of the lake reflects the disregard with which corporations have often held their neighbors in communities like West Indianapolis, and the national housing insecurity among poor people is especially pronounced in mobile home communities. It is perhaps easier to dismiss the residents of the former Blue Lake Trailer Park (now referred to as the I-70 Mobile Home Park) if we accept the shallow caricatures of trailer home communities, and the disinterested landlord that allowed Blue Lake’s pollution has certainly allowed the trailer park to decline after its 1950s height. Only about 14% of contemporary mobile home residents own the land where their trailers sit, and when they are displaced many of them cannot move the manufactured home that they own; many of the trailers at the former Blue Lake Trailer Park are no longer in condition that they can be moved, and it is still a costly procedure to move a trailer.

This holiday message was left at the Blue Lake Park after the residents were evicted.

Some of the residents resolved to abandon their mobile homes in place, and many had no concrete plan for new residences. One of the community’s displaced residents indicated in November 2019 that “she is preparing herself to live in her truck. … `I’m tired of fighting to get my head above water to turn around and be homeless again.'” Few laws protect mobile home residents from the closure of the parks where they live, and a wave of park closures leaves trailer life especially tenuous (compare Esther Sullivan’s 2017 study Displaced in Place: Manufactured Housing, Mass Eviction, and the Paradox of State Intervention; sorry, subscription access). Yet there is nothing inherently undignified about life in a particular form of residence, and the implication that trailer home communities do not conform to a particular ideological vision of home and middle-class subjectivity risks taking away their voice over their own destiny. It also hazards forgetting the whole rich history of the many long-term trailer parks in places like Indianapolis that have been closely linked communities for more than a half-century.

The Blue Lake is today fenced off from the trailer park because of contamination of the former quarry.

The Trailer Park that Became a City: Hilltop and the Importance of Mobile Home Parks as Endangered Historic Places. Minnesota History  65(8): 314-324.

2007 The wrong side of the tracks: Social inequality and mobile home park residence. Community Development 38(1): 74-91.

2016 Materialscape: The Transformation and Revitalization of an abandoned limestone quarry into an educational and recreational public park. Master of Landscape Architecture Thesis, Ball State University.