The “Blank Slate” of Pastness and African-American Place

Contemporary planners, developers, and proponents of 21st-century city life routinely celebrate cities’ historicity. Urban boosters extol the appeals of historical architecture, and where that historic built environment has been destroyed those urban champions applaud new designs inspired by local architectural heritage. Few neighborhoods would seem to lay a stronger claim on such history than Indianapolis’ Indiana Avenue. Home to residences as early as the 1820s, the Avenue became a predominately African-American business and leisure district at the outset of the 20th century only to witness postwar urban renewal projects that razed nearly all of the stores, clubs, and homes along the Avenue.

Last week a Development Project Manager for Buckingham Companies enthused about the developer’s proposal to build a 345-unit five-story apartment complex in the 700 block of Indiana Avenue, calling the site a “blank slate.” The parking lot and an undistinguished 1989 office building on the site indeed reflect none of the Avenue’s rich heritage. The asphalt parking lots and a functional but forgettable office building are yet more evidence of the city’s historical uneasiness with appearing to deter development after they had been vocal advocates for extensive urban displacement projects, Indiana University’s establishment and growth, and highway construction that collectively depopulated the predominately African-American near-Westside. American urban planners launched numerous similar projects after World War II that targeted African-American communities under the guide of slum clearance or community renewal, uprooting residents and then razing much of the Black urban landscape. These postwar planners hoped to build new cities, launching a host of ideologues’ fantasies for a reimagined city that would serve segregated White suburbanites who would work, play, and shop in the urban core.

By the 1980s this view of Indiana Avenue reflects that much of the neighborhood’s residential and business architecture had been razed. The project area is at the red arrow at the center of the image (click for a larger image; Indianapolis Bicentennial Collection, Indiana Historical Society)

Indianapolis is by no means unique for this postwar gutting of its downtowns or the displacement of Black communities that it imagined to be obstacles to progress. Yet now many of those 21st-century cities are compelled to admit the failures of their urban renewal fantasies and have been trying to lure residents back to the city to live, trading on the promise of downtown “revival” and celebrating the historicity of the urban core. On the one hand, Buckingham Companies aspires to acknowledge Indiana Avenue’s history. The apartment complex would sit alongside the Madam Walker Theater, a 1927 Afrocentric theater that was nearly the only structure on the Avenue to survive urban renewal. Buckingham’s legal counsel enthused last week about the possibility of establishing a jazz club in the apartments, which acknowledges the Avenue’s history of jazz performance, and the team gushed about how it was borrowing design elements from the neighboring Walker Theater. On the other hand, though, the development does not acknowledge or materialize the Avenue’s heritage as much as it evokes an ambiguous sense of “pastness;” that is, history is painted by developers like Buckingham simply as a style that selectively borrows aesthetic cues without an especially substantive historical or ethnographic comprehension of that living heritage. Historically and ethnographically informed design can be “of the past” and evoke specific histories even if their materiality is manufactured in the present; however, future Avenue development cannot lay claim to being a plausible representation of history without demonstrating an understanding of African-American heritage.

For Buckingham, the Madam Walker Legacy Center Board (who own and are selling the property), and city planners, the license for idiosyncratic historicized design is rooted in the position that the Avenue lacks a place-based heritage because the spaces are “blank.” That notion of “blank space” roots heritage in contemporary substance, the literal “authentic” materiality of the past such as buildings like the Walker. That rhetorical maneuver of rendering the Avenue and other non-traditional heritage places “empty” rationalizes the material interests of developers and the social designs of urban planners. For instance, a portion of the proposed apartments extends into a space where Madam C.J. Walker’s business office was once located alongside her now-demolished residence. The Madam Walker Legacy Center Board’s marketing chair dismissed the consequence of the site, telling the Indianapolis Star that “she isn’t concerned about construction on Madam Walker’s business and home because the building was demolished shortly after 1965. `It was demolished in 1965, and it’s 2020. …There hasn’t been anything there in over 55 years.’” That position fails to recognize that the consequence of place has no unequivocal relationship to contemporary material form: any space can be invested with historical significance, regardless of whether it bears material traces of the past or is radically transformed. Heritage is the product of existing materiality as well as memory, the histories of place, and the public contestation of what historical experiences matter. Many African-American cemeteries, 20th-century segregated neighborhoods, and lynching sites are dismissed by traditional history-makers because they are ideologically represented as “empty,” and planners ignore the contested if not unpleasant heritage of such places because they can dismiss them as absences. 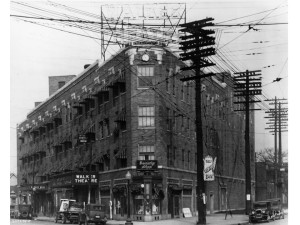 Designs evoking “pastness” often attempt to address the desires of a particular audience, in this case creating a historical style that will be appealing to potential tenants and satisfy city administrators who want to seem respectful of community history. Buckingham’s Project Manager waxed poetic over the Walker Theater’s deco symbolism, suggesting their plans take their “design cues” from the Walker; however, painting the Walker as art deco ignores that the theater is equally indebted to Afrocentrist design that springs from the Harlem Renaissance. Calling the proposed apartments “deco” is simply a clumsy marketing effort to appeal to the tenants Buckingham imagines they must secure while avoiding the anti-racist politics of inter-war Afrocentrism. Even if we set aside a patrol of what constituted deco design, the apartments borrow nearly no design aesthetics from rich retail and club architecture that once existed along Indiana Avenue and now survives in photographs, maps, and memories. Likewise, the Buckingham ambition to have a jazz club in these apartments is not about an appreciation or understanding of African-American expressive culture; it is their belief that a settled space offering jazz would fulfill tenants’ Avenue fantasy. This sort of Black placemaking risks becoming a statement about the social and racial imaginations of planners more than a material reflection of African-American heritage.

One of the last buildings standing in the project area in Indiana Avenue’s 700 block was the Blue Eagle Inn, which opened in October 1933 and is shown here at 701 Indiana Avenue in 1975 when it was known as Billy Mac’s Lounge, becoming Club 701 in November 1975 (Indiana Landmarks Central Canal & IUPUI Image Collection).

Pressed to articulate the company’s understanding of the Avenue’s heritage, Buckingham’s legal counsel complained “I’m not sure where that’s going” and concluded that “We’ve done our homework.” This risks painting history simply as rigorous mastery of past facts, which perhaps endangers potential profits. However, there have been grassroots movements to revive the Avenue since the 1960’s, so a broad range of constituents have long shared a desire to develop planning and design that will serve contemporary and future communities. Buckingham and their partners in the Walker Theater can choose to press ahead with a relatively uninspired apartment complex that fulfills their short-term profit incentives, but like so much of the postwar urban renewal landscape that building will inevitably age poorly. The Walker Theater is the institutional voice for the Avenue’s heritage, the institution that can lay claim to being on the Avenue for nearly a century, and the theater’s own growth and future will be coupled to this development. Yet IUPUI also has an ethical stake in the stewardship of the Theater and the Avenue; generations of descendant community members are part of the Avenue’s heritage; and many newcomers appreciate the Avenue’s heritage and feel a measure of stakeholder stewardship for this landscape. Dignifying that heritage and designing for the Avenue’s future requires acknowledging the consequence of the Avenue’s drab contemporary landscape of parking lots and office buildings, recognizing the legacy of racially based displacement, and designing the Avenue as a shared place uniting architects, investors, community stakeholders, and scholars.