The Final Choice: The Materiality of Last Meals

In 2012 Gary Carl Simmons sat down for an enormous meal including a Pizza Hut Super Supreme Deep Dish pizza; 10 8-oz. packs of Parmesan cheese; 10 8-oz. packs of ranch dressing; one family size bag of Doritos; 2 large strawberry shakes; two cherry Cokes; one super-size order of McDonald’s fries; and two pints of strawberry ice cream.  By about 4:45 one observer reported that he had eaten roughly half of the nearly 30,000-calorie feast before he was marched off to the Mississippi death chamber.  At 6:16 that evening he was declared dead after he was executed by lethal injection for a grisly 1996 murder. 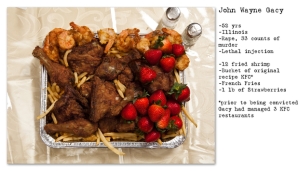 The last meal has become a standard ritual in the contemporary execution, an oddly fascinating public episode in the final moments before society passes its ultimate judgment on one of our own.  Today the ritual of a final meal and the last words of the condemned are the only particularly public dimensions of a death sentence.  Last meals seem to provide us a final idiosyncratic insight into the mind of the irredeemable; they provide exceptional clarity for the notion of “comfort food”; and the ritual itself may rationalize capital punishment or even humanize the ultimate sentence.  The final meal is symbolically fascinating because it balances a fine line between, on the one hand, human compassion and fascination for irredeemable citizens, and, on the other hand, a vengeful mob instinct that bourgeois execution ideology hopes to deny. END_OF_DOCUMENT_TOKEN_TO_BE_REPLACED