Ruins and Race in a World War II Ghost Town 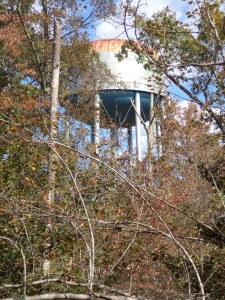 Perhaps the most distinctive ruins of the Cold War lie east of Richmond, Virginia.  In 1943 a decoy airfield was constructed by the 1896th Engineer Aviation Battalion to confuse potential aerial attacks on the US Army Air Corps based at nearby Byrd Field in Henrico County.  The battalion constructed a series of artificial structures and a fake runway arranged much like that at Byrd Field.  Yet a compelling if somewhat more complicated story is provided by the tract’s post-war history and its interpretation in the subsequent half-century.

In February, 1947 the state bid to purchase the decoy airport tract in Elko from the War Assets Administration with the intention to build an African-American mental hospital.  A streetscape, drainage, fire hydrants, and a water tower were erected, yet by June 1954 the Richmond paper had reported that “$500,000 of utilities are rusting at Elko.”  In October 1955 the Fredericksburg Free-Lance Star reported that the state was beginning training of “the grounds and buildings department of the proposed Negro training school and hospital at Elko near Richmond,” but in February, 1957 the Governor approved a switch of the hospital’s site from Elko to Petersburg.  The unfinished ghost landscape left behind remains an overgrown empty grid today attesting to measures of arrogance, racism, and distorted historical memory that distinguish Cold War America. END_OF_DOCUMENT_TOKEN_TO_BE_REPLACED