A 2010 reenactment at the Florida Agricultural Museum (image iambrianna)

On the afternoon of July 7th, a column of reenactors will launch yet another futile assault on Cemetery Ridge, 150 years and four days after the slope was originally charged by 12,500 Confederates who left half of their number dead on the hillside.  The Pickett’s Charge performance will cap four days of reenactments at Gettysburg a century-and-a-half after the battle.  Visitors will be able to tour camps with roughly 10,000 reenactors and watch the key moments in the battle from grandstand seating or a live pay-per-view “battlecast.”  This summer similar sesquicentennial reenactments will be held at the Battle of Corydon (Indiana), Morgan’s Raid (Ohio), the Battle of Richmond (Kentucky), and the Battle of Chickamauga (Ohio), following 150-year anniversary reenactments at Manassas/Bull Run in 2011, the Battle of Shiloh and the Battle of Antietam in 2012, and the Battle of Chancellorsville in May 2013. 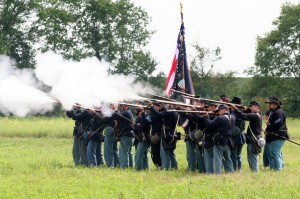 A Union line fires at a 2006 Ohio reenactment (image proftrusty)

We are now in the midst of the 150th commemoration of a series of America’s most horrific military engagements and a war whose legacy continues to provoke anxiety.  These battlefield reenactments are not about historical inquiry, since we have dissected every hour of battles like Gettysburg, and the Civil War has been relentlessly analyzed by a legion of scholars.  Reenactments instead uniquely evoke the bodily and emotional experience of 19th-century warfare:  conventional historical narratives debate the social effects and results of the war or even single battles without satisfying resolution, but a reenactment is a concrete physical experience for participants and audiences alike.  Reenactments sidestep most of the historiographical discord over the war over 150 years, betraying that many of us dislike a disputed history lacking clarity, especially one that has been linked to America’s complicated regional divisions and racist heritage.  The physical experience of warfare is not especially clearly captured by conventional scholarly narratives, but reenactment evokes the affective and bodily experience of combat.  It is of course impossible to capture the genuine visual horrors or experienced terrors of Civil War combat, so reenactments simply evoke some of the aesthetics and sensory cues of engagements and aspire to honor anonymous foot soldiers without clear reference to the structural discord that fueled the war. 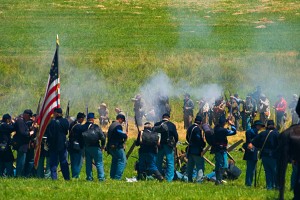 a 2009 reenactment of Pickett’s Charge at Gettysburg (image ronzzo1)

There are myriad types of reenactment including forms of living history such as Renn Fairs and museums that can range from highly scripted theater to largely improvisational and informal discussions.  Battlefield reenactments are partly distinguished from these other performances by their effort to demonstrate reenactors’ mastery of the materiality of soldiers and the movements of troops on battlefields like Gettysburg.  These battlefield reenactments strip away the complicated legacy of the Civil War and pedagogical narratives to a bodily combat aesthetics, a portrayal of the war articulated in sensory bodily dimensions—smoke, sound, temperature, sight, and space–we all can experience and grasp.  Gordon Jones’ 2007 dissertation underscores that reenactment appeals to many reenactors and audiences because it is an intense emotional experience:  muddy hillside charges, clouds of gunpowder smoke, sweat-soaked period uniforms, and chest-rattling cannon-fire make a distant but hallowed heritage seem “real and tangible.”

The 2008 reenactment at Gettysburg (image Oberazzi)

Leigh Clemons’ analysis of battle reenactors suggests that this embodiment of foot soldiers in battle implicitly celebrates combatants’ anonymity;  reenactments are essentially a populist theater that mirrors the reenactors’ identification as “ordinary” people.  The week before he goes to participate in this year’s Gettysburg reenactment, Clint Johnson made the same point when he indicated in the Winston Salem Journal that “reenactors go out in the heat and the cold, and the blazing sun and the chilling rain to honor the men of both sides.  It’s as simple as that. These Northern and Southern men left their homes to fight a war in which they had no personal stake.” Gordon Jones concurs that reenactors celebrate the Civil War soldier as an honor-bound citizen cast into an inconceivably unpleasant war beyond our 21st-century comprehension.

It would be easy to fixate on reenactment as transparent nostalgia, and battlefield reenactments do tend to focus on the bodily sensation of battle and sidestep the thorny sociopolitical heritage of the war.  Yet studies like Tony Horwitz’s Confederates in the Attic have risked casting reenactors simply as clichés standing in for a caricature of the White South.  Jones’ demographic research on reenactors does verify that they tend to be White middle-class conservatives.  For instance, Jones found that 67% of reenactors described themselves as Republicans; 92% of his sample was White; and 56% had not completed a college degree.  Nevertheless, only about 40,000 people can be considered reenactors, so their imagined Civil War is not necessarily an accurate reflection of Southern culture or broader American visions of the war. 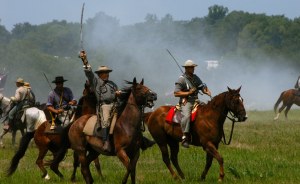 W. Fitzhugh Brundage’s assessment of Horwitz’s clever if flawed study concludes that reenactment reveals “our age’s hunger for intense and `authentic’ experiences” (a similar point is made about living history by Richard Handler and William Saxton).  Rather than focus purely on reenactors themselves (despite the rich ethnographic possibilities), we might instead divine a telling desire for such authenticity in reenactment.  Some of this likely reflects our aversion to scholarly master narratives.  For many people, scholarly history often has not been particularly compelling or accessible; social histories of the war and the subsequent century-and-a-half paint a complicated heritage that squarely confronts privilege, class, and racism that continue to inspire our collective anxiety.  Yet a reenacted battle also frames a story of sorts that coherently unfolds in time and space, and that implicit narrative of warfare—people locked in combat, bound by a commitment to honor–is ironically much more coherent than our everyday lives.

Scores of people have long ventured to battlefields to physically experience those spaces.  In 1903 thousands of spectators witnessed about 430 veterans who met at the site of “the Crater” in Petersburg, Virginia to recreate the 1864 battle in which they had exploded four tons of dynamite at the site.  Ten years later veterans marked the 50-year anniversary of Gettysburg, with surviving combatants meeting in positions at the site of Pickett’s Charge.  Those reenactments were not about the sensory experience of battlefield combat; instead, gathering soldiers from North and South crafted a contrived vision of reconciliation that awkwardly ignored Emancipation and racism and granted Southerners their honor in defeat. 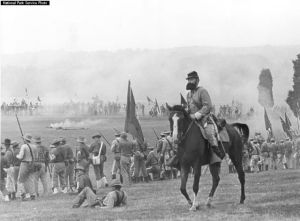 The Civil War’s centennial was marked with reenactments in 1961 at Manassas and Fort Sumter and Antietam in 1962, but the Manassas reenactment damaged much of the battlefield, resulted in a series of injuries, and caused some observers to question warfare as entertainment.   The National Park Service Director subsequently created a policy that did not authorize future reenactments on Park Service properties.

Many reenactors are certainly exceptionally well-versed in the minutia of everyday life in the war, and much of the highly particularistic detail valued by reenactors—encyclopedic knowledge of uniform fabrics, the biographies of soldiers, the topography of local battlefields—is outside the interest of most scholars.  Reenactments aspire to fire our imaginations with material authenticity, so much of the reenactment discourse revolves around prosaic if not mundane details such as clothing stitching and firearms and spatial movement of forces.  Scholars routinely point out that no representation or discourse can capture a historical reality, and some reenactors do somewhat naively fancy reenactment as a relatively seamless simulation of a battle.  Yet reenactment is at its heart a structured imagination of documented events and material culture, and it has no power if it does not invoke what we consider to be verifiable realities.  Those realities of uniform details, troop placements, and camp life are actually much more straightforward to interpret than the broader meanings of the war itself, so the realities of reenacted Civil War battles seem more more coherent than more ambitious narratives about the war itself.

“Authenticity” is a clumsy term, but battlefield reenactments are real experiences that exactingly recreate an inaccessible historical reality; their authoritative claim to authenticity is based on the seamless materiality and immediacy of the physical experience:  seeing intricately detailed buttons and uniform trim, feeling the percussive impact of gunfire on the battlefield, witnessing the choreographed movement of soldiers, and hearing the sounds of screaming and firearms on the battlefield provide an experience we do not derive from even the most eloquent textual narrative.

The picture of the Civil War painted by battlefield reenactments is necessarily particularistic, focused on the sensory experience of combat.  Pedagogically, reenactments are likely to only provide details of everyday soldiers’ lives that do not illuminate the war itself, and we could accuse reenactments of concealing the complicated heritage of the war itself.  Tony Horwitz wrote a piece in The Atlantic last week that presciently questions the American tendency to cast the Civil war as a heroic and noble cause and battle as glorious; Leonard Pitts has similarly championed seeing the war’s irrefutable link to enslavement and racism.

Reenactments likely do not undermine the tendency to reduce the war to a show of honor and battlefield glory, but they do not necessarily lapse into ideological distortions of the war either.  Battle is an inexpressible experience we laboriously imagine yet cannot articulate, and the reality of grim combat between Americans evokes our apprehensions about how tenuously the nation has always been held together.  Reenactments can push the boundaries of historical interpretation and narrative in novel ways, and they likely reveal the anxieties provoked by challenging social histories and the limitations of conventional historical scholarship that cannot evoke the physical experience of war so effectively.

1997 The New History in an Old Museum: Creating the Past at Colonial Williamsburg.  Duke University Press, Durham, North Carolina.

1988 Dyssimulation: Reflexivity, Narrative, and the Quest for Authenticity in “Living History.”  Cultural Anthropology 3(3):242-260.

200 Very civil wars: Reenactors, academics, and the performance of the past.  PhD Dissertation, University of California, Santa Barbara.

2008 The Golden Age of Battlefield Preservation: The Decade of the 1890s and the Establishment of America’s First Five Military Parks. University of Tennessee Press, Knoxville.