Play and Marginality: Gaming at Gen-Con

This week about 40,000 people have descended on Indianapolis for Gen Con, North America’s largest gaming convention gathering together a breadth of role-playing gamers, wargamers, and collectible card gamers.  There are some inevitable overlaps between the Gen Con crowd, the world of digital gaming, and kindred geek fandoms, but Gen Con gamers are united by a distinctively immersive, creative, and social gaming experience.  Despite gathering together such a broad swath of people, gaming itself is persistently caricatured as the province of the uber-nerd:  fantasy role players are often cast as circles of socially awkward guys sequestered in a basement poring over Dungeons and Dragons manuals and embarking on epic quests armed with Cheetos and Mt. Dew; wargamers obsess over the most modest details of battle (e.g., the use of smoke on World War II battlefields) and provide the likes of Napoleon, Pickett/Lee, and Burgoyne a second chance; and collectible card game (CCG) players trade from immense lockers of Magic: The Gathering cards. 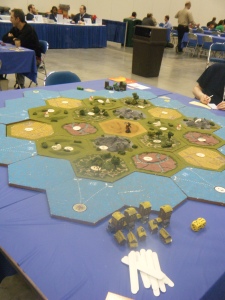 For those dissatisfied with their normal sized Settlers of Catan board, here’s a really big one.

There is perhaps a genuine thread of truth in all these characterizations, but caricatures of gaming and gamers do not provide any critical understanding of why people play; instead, they risk focusing on the somewhat impassioned and esoteric dimensions of gaming and ignore the social, creative, and intellectual depth of gaming.  Fixing on stereotypes fails to plumb the depths of why gamers construct themselves as “outsiders”; as with nearly any subculture, that marginal subjectivity is a contrived but nonetheless “real” social position that paints a contrast to normality, which should press us to examine how gamers see themselves external to some notion of mainstream order.

Observers have often shallowly psychologized gamers, plumbing the depths of apparent alienation confirmed by gamers’ retreat from public social space; others seem to be mystified by the commitment by a real person to accurately perform the fantasy role of troll; and by week’s end the local Indianapolis media will almost certainly run a few hackneyed stories on costumed nerds.  What is perhaps most interesting is that many gamers mock, tolerate, and even fan such stereotypes.  Some of this tolerance for apparent stigmatization simply insulates their passion and identifies the unworthy, but it also acknowledges that gaming may have little ambition to stake a claim to the popular consciousness like geek fandoms such as comics.  Outsiders may be unnerved by gaming’s steep learning curve and encyclopedic knowledge of things like warfare in the Pacific Theater or elves, bullywugs, and purple worms; nevertheless, other fandoms have mastered the complications of equally labyrinthine things like the Silver Surfer’s biography, the oeuvre of Osamu Tezuka, or the Polyphonic Spree’s catalog, and non-geeks routinely memorize sporting histories, obsessively follow the travails of the latest Bachelorette, and monitor the price of gas a cent at a time. END_OF_DOCUMENT_TOKEN_TO_BE_REPLACED