The Materiality of Whole Foods Market 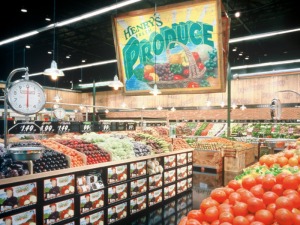 The material aesthetics of abundance.

Whole Foods is an ingenious space whose allure may have much more to do with attention to idiosyncratic but critical material design details than it has to do with organic food politics, liberal causes, or resistance to pesticides.  For those who have not done ethnographic fieldwork in one of these upscale grocery chains,  Whole Foods Market focuses on natural and organic foods and announces that “our goal is to sell the highest quality products that also offer high value for our customers. High value is a product of high quality at a competitive price. Our product quality standards focus on ingredients, freshness, taste, nutritive value, safety and/or appearance.”  The most prominent player in the $1.3 billion market niche of upscale natural grocerychains, Whole Foods Market has just over 310 stores in 38 states as well as the UK and Canada.

There has been significant attention paid to these upscale markets focused on, for example, where they decide to place stores, fair trade groceries, and even how to shop Whole Foods on a budget.  Nevertheless, few academic observers seem to have examined how the material spaces themselves shape the upscale grocery shopping experience.  The rare and most thoughtful exception is the prescient analysis of Greg Dickinson and Casey Malone Maugh, who analyze how competitor Wild Oats engages “a full range of embodied senses” in which “tasting, smelling, touching and looking lead to choices that involve the whole person.”  (Whole Foods agreed to purchase Wild Oats in 2007, but the market niche of premium natural foods hawked to the bourgeois was deemed sufficiently distinctive by the Federal Trade Commission that the merger was squashed in 2008.)  Dickinson and Malone do not wield archaeological methods to assess the Wild Oats experience, but they clearly have an archaeological sensibility when they assess how such upscale groceries fabricate an air of “abundant simplicity.”  I rarely frequent Whole Foods because, as Marge Simpson has said so perceptively, “we can’t afford to shop at any store that has a philosophy.” Given the expense of buying more than a handful of specialty items at Whole Foods, it is not a common grocery choice for all but the most committed or wealthiest consumers, but today I rationalized it for convenience and ethnographic research. 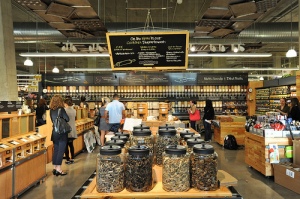 Dickinson and Maugh argue that markets have long been uniquely public social spaces, but most grocery stores are today sterile chain designs, indistinguishable from the ocean of heartless Walmarts and strip malls that seem to have no connection at all to local communities.  In contrast, Whole Foods is an absolutely compelling consumer space for several small but critical material reasons.  First, Whole Foods smells absolutely fabulous, and perhaps they really can celebrate that this deep rich and distinctive smell is a concrete confirmation of the difference between these foods and the mass farmed foods in Kroger’s.  Whole Foods and similar organic stores tend to smell even more powerful than real outdoor markets because the aromas sit in grocery stores but are dissipated in the open air.  Whole Foods is a wave of rich food odors that play out as shoppers move from vegetables to fish to the deli and on to the fromagerie, an experience much like the finest European groceries.  Whether aroma is truly “material” is perhaps a semantic issue, but it is difficult to separate the material experience of a fine restaurant—or a heaping garbage pile—from the perceptions of odor.

Second, Whole Foods is remarkably colorful.  The grocery’s astoundingly well-organized cases of pre-packaged fruits, fruit juices, and mysterious vegetables burst with colors that rarely occur in a major grocery chain.  The colorful products, mysterious brands, and text-rich labels explaining the philosophical merits of this particular good make for an especially compelling experience for a consumer who enjoys that sustained desire and the contemplation of things.  The aesthetics are absolutely critical, because I admit I found myself magnetically drawn to contemplate some products in aisles that I had no reason to even consider.  This is very different than shopping from a list in WalMart or rushing to the freezer at 7-11 for butter, because it aspires to empower a consumer with the sense they are thinking through their choices and assessing a breadth of factors, and that is very much a bourgeois, educated consumer pattern.  Whole Foods is not the place to go for class diversity, but it appears to ensnare everybody with a graduate or professional degree.

Any doubts about the compelling aesthetics of Whole Foods s are laid to rest by the surprisingly large number of pictures of Whole Foods, Wild Oats, and other upscale markets posted online on pages like flickr.  An enormous amount of photographers choose Whole Foods as their subject and bypass the more prosaic Krogers and Safeways that have become almost invisible to most consumers.  We do not really see or think much about mundane grocery spaces and similarly routine public spaces that have become so familiar that they are rendered essentially invisible.  But Wild Oats, Whole Foods, and similar chains like Trader Joe’s and Sprouts have identified a material aesthetics that is distinctive and visible and captures aspiring photographers even as it targets the desires of a particular range of consumers.

Michael Serazio’s 2011 analysis of Whole Foods reaches a similar conclusion that “increasingly articulate values and identity have become grafted onto” an otherwise banal shopping experience in such chains that reach beyond “niche margins to mainstream consciousness” and champion ethical consumption. Serazio says such spaces and their sales appeals step beyond normal branding, arguing that such “ethos groceries may well represent the next stage of branded products – defined as capturing the moral character, spirit, or imagination of a culture which, in this case, seeks to be bourgeois, bohemian, and baby boomer all at once.”  Michael Powell’s thoughtful contribution to Savage Minds examine a range of scholars who do “shopper marketing” and use the ethnographic and material tools of anthropology to assess and shape that most unpredictable of all things, consumer desire and behavior.

At the end of this we are still compelled to ask how that material experience masks Whole Foods’ fundamental desire to maximize profit.  Whole Foods aspires to evoke a sense of locality and community while it hawks goods from well outside the neighborhood, and identifications of the place from which various foods were grown attempts to construct a contrived sense of the local that evades all the inequalities in the chain of production that brings grapes to my Whole Foods.