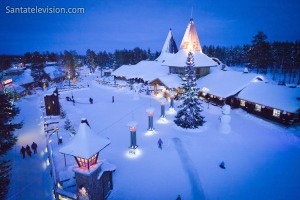 Santa Claus Village and the Arctic Circle line in the midst of winter (image from Santatelevision).

Santa Claus’ office and workshop sit along the Arctic Circle in Rovaniemi, Finland, and from his arctic headquarters Santa spends the year checking his list and entertaining visitors to Santa Claus Village.  Nestled in the Lapland woods, the village’s highlight is perhaps Santa Claus’ office, where Saint Nick and his elves hold forth for reviews of children’s behavior and photographs.  The Village’s attractions also include a post office, reindeer, a husky park, snowmobile trails, and shopping ranging from jewelry to log houses.  Not far away sits Santa Park, an underground labyrinth of caves including an elf school, gingerbread bakery, ice bar, and an Angry Birds Activity Area; for good measure, Santa’s “hidden command center” Joulukka sits in the heart of the forest in the same area.

It may be tempting to dismiss the Finnish holiday attractions as shallow consumer experiences, and a variety of scholars and ideologues routinely scorn places like Santa Claus Village and Disney World or reduce them to yet another post-modern self-delusion.  Much of contemporary tourism may be a search for pure diversionary pleasure in such places that embrace spectacle, celebrate patently inauthentic narratives, and offer unadulterated joy. In the midst of the Santa attractions’ imagination of the Yuletide, though, a quite concrete and even dark history exists in an especially fascinating relationship with the theatrical Christmas narrative woven in Santa Claus Village. END_OF_DOCUMENT_TOKEN_TO_BE_REPLACED

Concealing the Unmentionable: Sight, Sense and the Public Restroom

The “labyrinth” entrance to the Cavanaugh hall bathroom

The cinder-block walls and windowless offices of IUPUI’s Cavanaugh Hall have aged rather gracelessly over more than four decades.  The utterly functional brutal modernist building will inevitably meet the wrecking ball someday, but in the meantime administrators extend the decaying structure’s life with a host of makeshift changes.  The most recent renovations have come to a series of women’s restrooms (men’s apparently will undergo similar changes soon), which are now appointed with new tile, another set of toilets, and a slightly different floor plan.  None of those changes has prompted more fevered discussion than the installation of a labyrinth entrance; that is, the new bathrooms have no doors.  The labyrinth design is intended to minimize germ transmission and make restrooms more secure spaces, and nothing is literally visible from the adjoining public hallway; nevertheless, the absence of doors and the sonic amplification provided by the tile have unleashed a host of anxieties that illuminate the unmentionable, underscore the divisions between public and private spaces, and highlight the limits of functional restroom design.

The definitive study of the washroom is perhaps still architect Alexander Kira’s 1966 masterpiece The Bathroom.  Based on extensive research between 1958 and 1966, Kira ambitiously approached the bathroom as an architectural, functional, ergonomic, and social space.  Kira pilloried architects’ sloppy bathroom designs and the century of architectural planning that viewed bathrooms as mere afterthoughts.  Kira instead ethnographically delved into the “bathroom experience” as a design issue with concrete social and psychological dimensions that needed to be placed at the heart of spatial planning.  Among other things, Kira systematically dissected such hither-to unexamined issues as the physics of urine trajectories, the space between urinals, the physiology of seated positioning, the cleaning ineffectiveness of toilet paper (a passage not for those apprehensive of cooties), and the anxieties created by the acoustics of elimination. END_OF_DOCUMENT_TOKEN_TO_BE_REPLACED

There may be no more audacious pursuit of global justice than the Air Guitar World Championship’s aspiration to “promote world peace.  According to the ideology of the Air Guitar, wars would end, climate change stop and all bad things disappear, if all the people in the world played the Air Guitar.”  It is perhaps difficult to conceive of a host of global diplomats exaggerating the fluid moves of Jimmy Page and Jimi Hendrix, yet last week a legion of the faithful gathered in Oulu, Finland for the 19th annual Air Guitar World Championship’s unique performance of self-aware camp, bold sincerity, naïve optimism, and playful theatre.  Air guitar is quite possibly among the most democratic if not egalitarian of all expressive arts.  Even the clumsiest person is capable of reproducing the familiar motions of guitar players, and it harbors an interesting politics of community that may not yield world peace, but it is a fascinating and idealistic starting point.

It is tempting to reduce air guitar to shallow imitation of authentic musical performance, but air guitar is not really mimicking as much as it is its own performance.  Air guitar playing makes sense to audiences because it invokes physical and musical referents that nearly all of us know.  In some ways, this is much like Elvis performance artists, who are not “impersonators” as much as they interpret threads of popular musical consciousness.  Where Elvis performance artists do sing, air guitar may be distinguished by its celebration of the pleasure so many of us take in music we cannot hope to play and the optimistic democracy of air guitar.  The compelling fundamental attraction of air guitar is that it appears so simple and accessible to all of us with the faintest musical sentiments and a suppressed desire to strut about with Angus Young’s theatrical lack of self-consciousness. END_OF_DOCUMENT_TOKEN_TO_BE_REPLACED