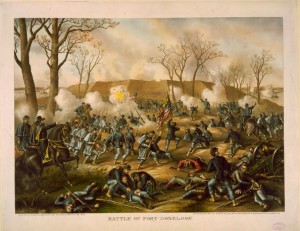 This circa 1887 chromolithograph captured the Union victory at Fort Donelson (Library of Congress).

On February 16, 1862 the Union Army captured more than 7000 Confederates at Fort Donelson, Tennessee. Many of the Confederates were serving in the First Kentucky Brigade, the largest Confederate unit recruited from Kentucky, and about 3700 of the captured rebels were escorted to Indianapolis to be held in the newly opened Camp Morton prisoner of war camp. There were numerous Hoosiers who had Southern sympathies or had even sided with the rebellion, and some of the captured Confederates actually knew Indianapolis quite well. Greenup B. Orr, for instance, was born in Kentucky in about 1826 and served in the Fifth Indiana Volunteers during the Mexican-American War. Orr enlisted in Madison, Indiana in October 1847, served in Company F in Mexico, and mustered out in July 1848. He returned to Gallatin, Kentucky, where he was living in 1850 and married a year later in March 1851. By 1855 Orr had moved to Indianapolis and was working as a brick mason at the corner of Indiana Avenue and Tennessee Street (now Capitol).

Greenup Orr was still living in Indianapolis on the eve of the war in 1860, but as Orr’s neighbors began to enlist for the Union cause, Orr traveled to Camp Boone Tennessee, where the 35-year-old joined the Confederacy’s 2nd Regiment Kentucky Infantry on July 13, 1861. The 2nd Kentucky Infantry was organized in July 1861 at Camp Boone, so Orr was among its earliest volunteers. Orr was joined by Indianapolis resident Alfred (Alf) McFall, who volunteered the same day as Orr. McFall was born in about 1838 in Ohio, and in 1850 the 12-year old was living in Indianapolis with his mother Ann, older sister Margaret (age 14), and brothers George (10), William (8), and Oscar (5). It is not clear where the McFalls were living in 1850, but Ann was listed in the 1857 Indianapolis City Directory living on Market Street between East and Liberty Streets.

The 1862 roll of prisoners of war identified Greenup B. Orr being held at Camp Morton.

On February 16, 1862 Orr and McFall were among about 618 men from the 2nd Kentucky Infantry regiment who were captured at Fort Donelson, Tennessee. On February 24, 1862, the Indiana State Sentinel prepared for the arrival of Confederate prisoners to be held in Indianapolis’ Camp Morton. The newspaper acknowledged that “There are many Northern men, some from Indiana, several from Indianapolis, we are informed, with these prisoners,” including “Green B. Orr and McFall, formerly of this city.”

While Alf McFall would join the rebellion in July 1861, his brothers George and William McFall had traveled to Louisville almost a month earlier, and on June 16, 1861 they enlisted for the Union cause. Alf’s younger brothers joined the Union’s 2nd Regiment Kentucky Infantry, Company E. George was assigned to deliver supplies; he was in a convalescent camp in Nashville, Tennessee in December 1862, but he returned to serve on an ambulance train beginning around April 1863 and eventually mustered out in June 1864. His brother William likewise was a wagon driver delivering supplies, and William was wounded in September 1863 at Chickamauga. William would return to duty and muster out on the same day as his brother George in Covington, Kentucky. 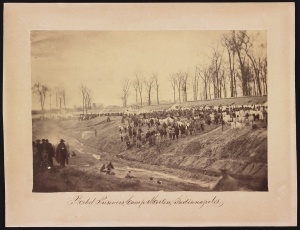 Confederate prisoners gathered at the drainage ditch in Camp Morton in 1862 (Library of Congress).

Greenup Orr was imprisoned in Indianapolis until June 23, 1862, when he was among a group of prisoners transferred to Camp Chase, Ohio. Two months later Orr was part of a prisoner exchange, and he returned to the Confederates in Vicksburg, Mississippi on August 25, 1862. An 1868 history of the First Kentucky Brigade (which included the 2nd Regiment) confirmed that Orr subsequently saw action in Chickamauga in September 1863 (and probably the Battle of Stones River in December 1862-January 1863). He was among the Confederates in the defense of Atlanta before surrendering in Georgia in April, 1865. Orr returned to Gallatin County, Kentucky after the war, where he re-married in 1868 and was farming in 1870, but he died sometime in the following decade and appears to have never returned to Indianapolis as a resident. 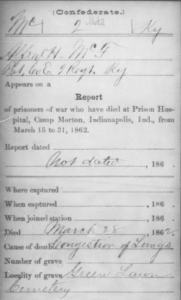 Alf McFall was reported as dead just a month after arriving at Camp Morton.

In March 1862 Camp Morton had only been open just over a week when Indianapolis’ Journal reported that a reader requested the paper “publish the names of all the prisoners at Camp Morton because many citizens have relations there.” It is not clear how many imprisoned rebels actually had family in Indianapolis, but the Circle City certainly counted many Confederate sympathizers amongst its ranks, and some residents would have known Alf McFall and Greenup Orr. While George and William McFall were fighting for the Union, their brother Alf was one of 50 soldiers in the 2nd Kentucky Company E to arrive at Camp Morton as a prisoner in February 1862. Two days after opening on February 24 the Daily Sentinel reported that “there are from two to three hundred sick at Camp Morton, and of these at least forty or fifty are dangerous, unless they are removed to better quarters, and better cared for. Some two or three have already died. The diseases are varied, principally camp fever and diarrhea.” On March 1 the Richmond Palladium reported that “the deaths among rebel prisoners at Camp Morton average six per day.” By March 24 it was reported that 108 prisoners had died at Camp Morton. Alf McFall was one of five prisoners who died on March 29, 1862, with his cause of death reported as “congestion of the lungs.” McFall was buried at Greenlawn Cemetery with other prisoners of war, and he was eventually moved with them to a space on the south side of Greenlawn before being re-buried at Crown Hill Cemetery in December 1931, where he rests today.

Battle of Fort Donelson–Capture of Generals S.B. Buckner and his army, February 16th 1862, Library of Congress.

Posted on March 10, 2021, in Uncategorized and tagged civil war, Indianapolis. Bookmark the permalink. Leave a comment.