The online announcement for the NWA “ghetto fabulous” yoga class.

Last week a Santa Barbara yoga studio devised a novel event called “NWA” (that is, Namaste with Attitude), which they promised would be “ghetto fabulous.”  The Power of Your Om (POYO) yoga studio conjured an awkward constellation of color and class caricatures in its pledge to provide “the sounds of Snoop, Nate Dogg, Warren G, Coolio and many more faves.   Serious attitude, guaranteed belly laughs and various costumes to be provided.   Please come dressed in your favorite ghetto fabulous outfit, snap-back caps, corn rows, heavy lip liner or whatever you can dream up.”  For those Santa Barbarans uncertain of their “ghetto” credentials, the studio provided do-rags and included a link to a Wiki page explaining how to be “ghetto-fabulous.”  Their facebook page afterward included a host of images of glistening White suburbanites flashing gang signs in a clumsy imagining of “ghetto.”

The California yoga studio is hardly alone for its naive ghetto fantasy, borrowing popular caricatures invoking style, color, impoverishment, and class.  While a handful of Santa Barbarans were sweating to Snoop, the web site Ghetto Tracker was unveiled with the promise to identify “which parts of town are safe and which ones are ghetto, or unsafe.”  Ghetto Tracker assesses the perils of particular places based on user reviews, which of course does not map any concrete patterns as much as it maps class and color assumptions, impressions, and stereotypes.  Ghetto Tracker is not alone among websites and phone apps linking local geographies to criminality:  the SafeRoute app includes crime statistics for certain neighborhoods; and Road Buddy likewise uses crime stats to chart what it defines as the safest travel routes.  The novel wrinkle in Ghetto Tracker is its projection of racial imagination onto the landscape, allowing users to place their passing impressions, isolated experiences, and unacknowledged xenophobia onto social maps.  Numerous pages provide exceptionally detailed geographies of crime—SpotCrime, for instance, plots crime reports by type and location almost instantly—but Ghetto Tracker is a telling if unsettling reflection of how people perceive particular places. 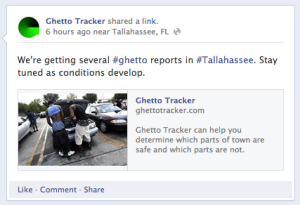 Precisely what ghetto means in any of these discourses is somewhat ambiguous, but it certainly revolves around a stereotype of Blackness.  Like nearly any American audience, the Santa Barbara yoga classmates had a remarkably thorough recognition of ghetto symbols, and they quite likely had an unacknowledged fascination with “ghetto culture” and Blackness.  We might forgive POYO for thinking ghetto is simply a style or an ironic characterization; however, ghetto and ghetto fabulous ironically invoke popular cultural caricatures even as they capture something truly meaningful in African-American experience.  POYO failed to fathom how meaningful those referents are to many people, and the studio’s celebration of Snoop, do-rags, and corn rows risked reducing consequential cultural practice to mere appearances.  Yet the yoga studio certainly is not alone in their imagination of ghetto as surface style that is not clearly reducible to being either “real” or “fake.”

Ghetto has a long heritage referring to ethnically insular enclaves, but it has only recently assumed the Black social and stylistic symbolism invoked by Ghetto Tracker and Power of Your Om.  In 1875, a New York Times correspondent painted a picture of the “Ghetto, or Jews Quarter” in Rome, borrowing from the early 17th-century term for a segregated Jewish district.  The visitor to the long-neglected neighborhood indicated that “the greater part of these sons of Israel are crowded into the narrow, dark lanes,” concluding that “it is a fitting nest, and as dark and disgusting as Rome formally was in many parts, no part was equal to this in the aspect of squalid wretchedness which it presented.”

As Black Metropolis predicted, the linkage between Blackness, space, and poverty clearly was indebted to “slum clearance” and urban renewal schemes that transformed urban America after World War II.   In the hands of the state, ghetto was a subjectivity that rationalized racially based inequality and displacement even as it painted Black America as an undifferentiated collective.  Drake and Cayton’s masterful Black Metropolis dissected complex social differences within Chicago’s African-American community, but many more social scientists reduced Black urbanity to an undifferentiated mass.  Robin Kelley lays much of the blame for this at the feet of 1960’s scholars:  eager to erode “culture of poverty” arguments, social scientists aspired to identify the “authentic” threads of a monolithic African-American culture.

In this scholarship–and much of the popular representation of ghetto that followed–, ghetto was an ambiguous social geography that implied deteriorating cities and segregated, socially isolated, and desperate communities.  The Blackening of ghetto really took root in the popular imagination in the 1960s:  for instance, in the 1950’s the terms Negro and ghetto appeared in 65 New York Times’ articles, but in the 1960s 2057 articles linked the terms in a single article (77 editorials appeared in 1968 alone).  A popular fabrication rapidly emerged of “ghetto culture,” and in many ways, the contemporary notion of “ghetto fabulous” is a response to the 1960’s and 1970’s representations of ghetto.

In January 1996, Uptown Records’ founder Andre Harrell described his label’s music as “high style urban black life a.k.a. ghetto fabulous.” Harrell’s use of the term may well be its first public airing, ironically playing on the contradictions of wealth in impoverished urban communities.  In December, 1998 the New York Times suggested that Hype Williams’ rap videos for Missy Elliott and Busta Rhymes “had made rap videos glamorous, or `ghetto fabulous,’ in the parlance of the industry.”  The Times used the term to evoke an aesthetic, and while it may imply a footing in genuine Black urban experience that aesthetic appears in public space simply as extravagant style with ambiguous links to African-American experience.

As a marketed style in contemporary popular culture, ghetto fabulous invokes the backdrop of inner-city Black neighborhoods, a motif that ironically borrows from other popular ghetto references, like Blaxploitation cinematic aesthetics.  In some hands, ghetto fabulous seems to moralize about the material and economic irrationality of living “above one’s means” and laments its stylistic gaudiness.  In other usage, ghetto fabulous implies imagined affluence, as opposed to concrete wealth; the material aesthetic overdramatically fantasizes about wealth by displaying things that distance consumers from impoverishment.

Much of the symbolic distance from urban impoverishment and inequality is heightened by embracing costly and utterly visible things.  The material things used to evoke ghetto fabulous life are all aesthetically visible or brands linked to wealth:  luxurious cars, branded clothing like Louis Vuitton and Gucci, jewelry, meticulously done hair and nails, tattoos, and grills figure in the caricature of ghetto fabulous.  Such things are less a response to or negotiation of ghettoization than they are creative imaginations of everyday life; that is, they are elements in an expressive culture that that is constantly re-conceiving its public representations, disparate local experiences, and a complex color and class heritage.  Yet those objects and the subjectivity of ghetto have become even more prominent as shallow marketing and popular props, which is reflected in their invocation for mapping programs and yoga sessions.

The Power of Your Om studio director issued a clumsy apology on her blog about the yoga class, but by that time social media’s crusade had already launched:  some observers defended her right to “cultural appropriation,” celebrated her innocent homage to Black culture, or accused her critics of being, in one pundit’s words, “a bunch of uptight censorious goody goodies”; others launched hyperbolic attacks that cast the class as an indicator of the universality of racist hatred, firing mean-spirited caricatures of suburban yoga students into the public square that is the facebook comments column.

Ghetto is an intentionally ambiguous term that masquerades as a deep-seated historical reality, but much of the racialized symbolism we attach to ghetto really has emerged since World War II.  Ghetto is in various hands a surveillance term used by the state to define particular communities; in other hands it is a shallow style that implies but does not define urban Black experience; in marketing hands, ghetto condones White fascination for some authentic Blackness that is itself a monolithic stereotype of African-American experience; and in other hands ghetto is a condition of imagination that has no place as much as it is a creative rethinking of racial and class representations and experiences.  Yet whether imagined by yoga studios or advertisers, ghetto harbors a meaningful if complex social experience.