← Riding the Color Line: A Century of Race and Cycling
Roadside Rebels: Heritage Theatre and the Confederate Flag → 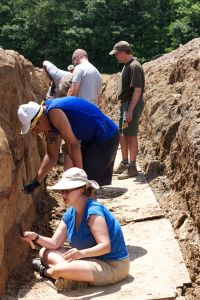 This week in the midst of a government shutdown Eric Cantor and Lamar Smith took a stand in USA Today against archaeology and a swath of ambiguously defined “science programs.”  Cantor and Smith argue that the nation should significantly restrict federally supported science projects (especially social sciences), and in a moment of economic hardship such fiscal discipline sounds attractive.   However, their superficially reasonable fiscal sobriety masks a deep-seated aversion to critical scholarship and the academy, caricaturing archaeological research and taking aim on all social sciences in the process.

Cantor and Smith’s deceptive assault on National Science Foundation funding singles out disciplines like archaeology that they reduce to luxuries and recreational pastimes.  Berkeley Professor Rosemary Joyce provided a measured defense of projects that Cantor and Smith suggest should not be counted among our national priorities.  Joyce very thoughtfully acknowledges that “misleading storyline offered in this opinion piece begins with the suggestion that the tiny amount of the Federal research budget dedicated to the scientific exploration of the past is blocking research on urgently needed medical innovations” (compare responses from James Doyle and Adam Smith).

Of course the oddly timed attack from the Hill has little to do with funding priorities and limited funds.  Instead, it has much more to do with Cantor and Smith’s anxiety about the culture of scholarship.  Cantor and Smith’s opinion piece is transparent rhetoric that grossly misrepresents the academy and caricatures a few archaeological research projects to serve their bolder misrepresentations of scholarship and the academy.

It probably serves little purpose to defend the series of grants singled out by Cantor and Smith, since it leaves their fundamental rejection of social science funding unchallenged.  Instead it is more productive to shift the discussion and ask precisely what archaeology is doing well, and for Cantor and Smith we may need to simply articulate what archaeology does at all.  Surprisingly, archaeologists are not always especially articulate advocates for the cause, unable to rationalize our discipline beyond advocating for the virtues of knowledge about self, society, and heritage.  Those are not bad answers as much as they sound self-serving to an outsider who may have accepted the caricatures of academics as spoiled elitists; that is, we risk appearing unsympathetic to the material realities of our neighbors’ experiences if we simply defend abstract knowledge and archaeological employment.

Cantor and Smith’s most transparent rhetorical flourishes are easy enough to dismiss.  The most misleading of those is their argument that “Congress is right to ask why NSF chooses to fund research on Mayan architecture over projects that could help our wounded warriors or save lives.”  As they certainly realized when they framed this false dichotomy, the funding for scholarship on wounded soldiers comes from different programs than those funding archaeology, so there was never a choice between Mayan archaeology and neurological research on wounded soldiers.  What that manipulative aside really reveals is that Cantor and Smith propose to move all funding to select programs that they define as high priorities.  This breaks from the culture of anonymous academic peer-review that now governs grant decisions from funds provided by the federal government.  Cantor and Smith are really indicating that they do not trust academics to patrol each other with intellectual and professional rigor or with any sense of gratitude to the taxpayers.  I have never applied for an NSF grant myself, but I have reviewed many proposals (without charge to the taxpayers) because it is a professional responsibility to my colleagues, the NSF, and the taxpayers, and I have seen many corners of archaeological scholarship dramatically transformed by NSF support.

Given their prominence in decisions about science funding, we cannot completely ignore Cantor and Smith’s rhetoric, and in the absence of thoughtful responses some people may share the Congressmen’s feelings.  Every archaeologist (or scholar) should be able to rationalize their scholarship and state clearly what they have learned that is somehow important and useful to the rest of us.  In archaeological circles our best claims may come from community-based archaeology projects that engage living stakeholders in the scholarship of their ancestors or communities (e.g., the Mashantucket-Pequot Museum’s work in Connecticut, the African Burial Ground in New York City, or the Sonoma State University Anthropological Studies Center’s West Oakland, California project).  The implications are often truly material and economic in heritage tourism and real estate development; they can be somewhat more allusive contributors to community pride and self-consciousness; and they can instill a sense of self-reflection and imagination that transforms how educated people see and experience the world.  Cantor and Smith, though, are wary of critical thinking, contemptuous of publicly funded imagination, and implicitly frame a science that is made up of objective knowledge targeting concrete challenges (e.g., Alzheimer’s research) or a narrowly defined “demonstrated return on investment” (e.g., computer technology).

Maybe the most demoralizing part of Cantor and Smith’s argument is their implication that archaeologists are not grateful to the communities in which we work or to the funding agencies and taxpayers that make our scholarship possible at all.  Their suggestion that archaeologists skirt accountability could not be more untrue; every responsible archaeologist wants to share their work with people beyond their narrow disciplinary boundaries and the walls of the academy, and most are energized and have their work creatively expanded by non-academic research partners.  There are some elitist academics disinterested in community service, sheltered by tenure, and engaged in hyper-specialized research that few of us can comprehend.  However, that stereotype of the academy holds increasingly untrue in a world in which the vast majority of our students are not archaeologists, many academics are outside tenure stream employment, and most archaeologists work in cultural resource management.  Cantor and Smith abuse such stereotypes simply to parody academics, ridicule social science scholarship, and secure populist appeal.

We can more effectively communicate what archaeology does, and in the process we can disabuse some naïve listeners of the shallow stereotypes wielded by Cantor and Smith.  Many people and communities are dramatically impacted by archaeological scholarship and are fascinated by archaeological heritage.  There is no single strategy toward communicating our practical effects on people and places, and this week I included some possible starting points on the SHA Blog.  They revolve around refining our skill communicating what we do; being able to articulate what archaeology reveals that is interesting and important; and partnering with communities who may be more effective demonstrating the worth of archaeology than we are ourselves.  Some politicians and pop commentators may ridicule archaeology in particular and scholarship in general for their own narrow gains, but we should not let gross misrepresentations stand unchallenged.

← Riding the Color Line: A Century of Race and Cycling
Roadside Rebels: Heritage Theatre and the Confederate Flag →