← Blogging as Public Archaeology
Archaeological Blogging: Beyond Stones-and-Bones and Pseudo-Knowledge →

Karl Bitter’s 1898 installation The Races of Mankind was placed on pillars when it came to Holliday Park (image from Donna Cazadd).

At the heart of Indianapolis, Indiana’s Holliday Park sit the remnants of an artwork its designer hoped would be known as Constitution Mall.  The remains are typically referred to simply as “the Ruins,” though, and in the heart of the city park they are a picturesque if unexpected backdrop:  ambiguously evocative of a deteriorating heritage, the Greek columns, a reflecting pool, and a scatter of limestone statuary are today fenced-in and grown over with weeds.  The centerpiece of the remains is an 1898 sculpture designed by Karl Bitter known as “the Races of Mankind” depicting three kneeling figures who represent “the Caucasian, Negro, and Mongolian races bearing mankind’s burden.” 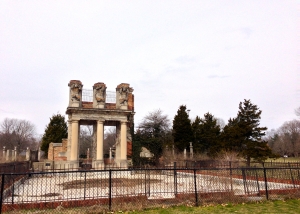 The Ruins in April, 2013 (image from netmonkey)

The three sculptures were created at the end of the 19th century, but the installation itself was created in the 1960s and 1970s, a faux ruin rather than a genuine architectural shell.  Park boosters’ interest in “renovating” the Ruins now signals that the piece has passed from an artwork evoking romantic ruination to a true ruin that somehow fails to capture an aesthetic ideal and has no self-evident consumable value.  The discussion over how to rescue an artwork that was always intended to be a ruin illuminates the complicated intersection of aesthetics and ruination.

Bitter’s statues came to Indianapolis in 1958 after the St. Paul Building in New York City was torn down.  Architect Francis Keally presided over a committee that reviewed proposals for re-using the statues: the city of Indianapolis, as well as New York University, Columbia, and Farleigh Dickenson submitted plans to re-use the sculptures.  The New York Times’ Meyer Berger reported that “Indianapolis was awarded the figures by a committee because it plans to set them in the middle of a reflecting pool, a lofty setting identical to that envisioned by the sculptor.” The paper indicated that Indianapolis architect David V. Burns “has drawn tentative plans for the future installation.”

These limestone tablets emblazoned with the Preamble to the Constitution were dedicated in 1977. Taflinger hoped the installation would become known as Constitution mall, but it remained known as “the Ruins” (image from EC Garrison)

The crumbling artwork was always intended to be ruins.  On November 20, 1958 the New York Times acknowledged that the sculpture would be “shipped to Indianapolis for use as a romantic ruin in Holliday Park.”  Indianapolis artist Elmer Taflinger was tapped to design a display for Bitters’ migrated statuary, and Taflinger’s design gradually unfolded over two decades.

The local discussion over preservation of the Ruins has been reduced to a somewhat shallow discussion of Taflinger as a prototypical temperamental artist; his project has been described as a “folly” by one donor to the current renovation project, and the Indianapolis Star’s Will Higgins referred to it as “artistic vision run amok.”  Taflinger did indeed chafe against city funding of the installation, and beginning in the 1960s he continuously collected new materials to add to the ever-unfolding work, including the 26 columns from the Sisters of Good Shepherd Convent, four female figure statues from the Marion County Courthouse, and a horse trough from Indianapolis’ Fountain Square (compare his designs in the Holliday Park history).  The Ruins finally were dedicated in 1973, apparently in part to bring an end to Taflinger’s continual tinkering with the concept (though he continued to make changes to it afterward).

A close-up of the Karl Bitter statues (image from c.harnish)

In 1994 a committee proposed to remove the Ruins entirely.  In 1994, the Friends of Holliday Park suggested that removing the Ruins was consistent with their mission “to refocus on the environment. . . Current plans call for The Ruins to be dismantled, and the space they occupy will be a field or a pond. In the meantime, the statues will be incorporated in a grand entrance on Spring Mill Road.”  The Indianapolis Star’s columnist Andrea Neal agreed that “by any reasonable standard, The Ruins and mall are neither coherent nor beautiful. They are a hodgepodge of trees, limestone slabs, pillars and a reflecting pool.”  Neal took a shallow populist dig at the aesthetes defending the Ruins, arguing that “It would be a shame if art purists thwart the plans for a much needed nature center by insisting The Ruins not be touched.”  Despite Neal’s protestations, the Ruins remained in place in the face of resistance to their dismantling.

Clearly some people never liked the Ruins as artwork.  Emily Hinkel’s discussion of the Ruins’ origins notes that in 1963 a reporter called them a “meaningless exhibit, serving primarily as a potential death trap for youngsters.”  The Indianapolis Star reported this year that “Alexander Holliday, the grandson of the man who gave the park to the city, once said the Ruins reminded him of ‘the bombing of Dresden’ and that his grandfather would have been appalled by them.” These rhetorical asides likely reflect some park boosters’ uneasiness with the Ruins as part of the park’s mission, which probably contributed to their benign neglect. 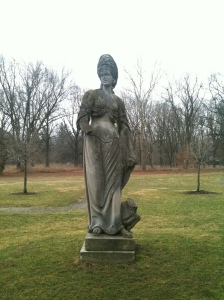 One of the statues adorning the grounds around the central Ruins (image WIkiProject Public Art).

Almost two decades after the first effort to raze the Ruins, discord over their aesthetic merits—and the appropriate aesthetics of Holliday Park itself—are again being discussed.  The Indianapolis Star’s Will Higgins revisited much of the 1994 arguments when he suggested in June, 2013 that “Today, after decades of neglect, the Ruins are a dilapidated, weed-choked, fenced-off mess — they are genuine ruins.  They’re about to get a thorough makeover that will bring them into the 21st century and render them more fun. The Ruins didn’t used to be much fun. You weren’t allowed to climb on them. All you could do was look at them.”

Ruins have normally been reserved for (or even defined by) just such aesthetic contemplation:  that is, ruins provide a material testament to the folly of over-ambitious states, the inevitable ebbs-and-flows of economies, moments of ill-conceived style, or the inescapable march of nature.  For many contemporary detractors, though, the Ruins apparently only evoke neglect; perhaps the absence of genuine historical depth (that is, they are not “real” ruins) prevents that erosion from being a source of nostalgia or introspection for some observers.

The new renovation plans squarely aim to convert the Ruins from apparently useless disrepair to a specific form of consumer utility.  A community committee aspires to renovate the space, keeping the Bitter statues in a renovated space including “a shimmer fountain and other interactive water features, benches along a tree-lined promenade, rain gardens and a festival lawn.”  In this sense the Ruins—as both artwork and genuine ruins—reflect boosters’ effort to turn the park into a consumable space.  The park has always been a space in which urbanites might consume a particular experience of nature, and the 94-acre city park justifiably heralds itself as a natural oasis in the midst of the city’s northern suburbs: the park does indeed have a wonderful series of trails, a nature center, and an impressive playground along the White River. 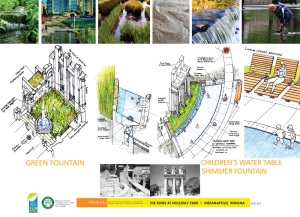 The renovation of the Ruins—and the specific sort of consumable natural experience the park aspires to provide—is firmly linked to substantial financial support for the park.  The land was deemed to the city by John and Evaline Holliday in 1916, when the space was a country estate neighbored by a select handful of luxurious homes.  Most of the same homes remain alongside more recent suburbs, and in June 2013 Will Higgins acknowledged that the Ruins’ renovation “will cost millions, but that is not a problem for the Ruins.  The nonprofit Friends of Holliday Park, a consortium of well-off Northsiders, many living in the lovely houses near the park, is privately raising $3.2 million.”

Perhaps park boosters can contemplate transformations to the Ruins because they are cast as an artwork without genuine patina (that is, what Paul Dobraszczyk refers to as a “positive form of decay” that for some observers evokes authenticity).  The Ruins are not viewed as a “natural” erosion of something that was authentically part of the Holliday Park landscape; the Holliday home was not allowed to deteriorate into ruins and was instead razed, and most of the park’s landscape is immaculately managed in the invisible way most parks are constructed.  The Ruins instead are viewed as having no function except as aesthetically pleasing things; unlike “real” ruins that evoke romanticism, nostalgia, and perhaps anxieties, the Ruins have now eroded in the eyes of detractors and lost any visual appeal they once had.  Visual appeal alone may not be sufficient to preserve the Ruins in some form other than as a decoration to a bourgeois park; the Ruins now apparently require some concrete consumable utility as a wading pool besides the aesthetic musing they appear to now evoke.

1958 About New York: The Future of Heroic Statues of ’96 to Be Settled by Architecture Group Today.  New York Times 7 November: 24.

1958 To Preserve Sculpture: Fitting Home Should Be Provided for Bitter Statues, It Is Felt.  New York Times 25 June: 28.

Races of Mankind on pedastals image from c.harnish

← Blogging as Public Archaeology
Archaeological Blogging: Beyond Stones-and-Bones and Pseudo-Knowledge →