← Imagining the Black Suburbs: Homogeneity and African American Suburbia
The Optimism of Destruction: Demolition and the Future of the Historic City → 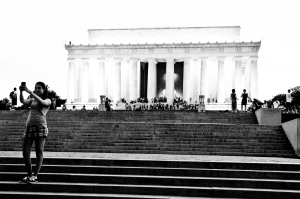 A selfie at the Lincoln memorial (image Joe Flood).

A variety of ideologues routinely reduce selfies to yet another confirmation of our mass superficiality.  Instagram is indeed littered with scores of us primping for our bathroom mirrors and posing at arm’s length for “ego shots”: it seems infeasible to salvage especially profound insight into contemporary society from Justin Bieber’s self-involved posing or Kim Kardashian’s often-ridiculous stream of booty calls.  Nevertheless, the countless online selfies register a self-consciousness about appearance that is likely common in every historical moment, and the recent flood of online selfies may simply confirm that we know we are being seen and we are cultivating our appearance for others.  After looking in the mirror for millennia, digitization has provided a novel mechanism to re-imagine, manipulate, and project a broad range of personal reflections into broader social space. 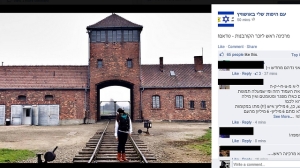 An image of the facebook page of camp selfies.

Last week a New Yorker article fueled selfie critics who lamented the apparent narcissism of selfies at Auschwitz.  The page was removed after a host of media decried self portraits at the concentration camp and rejected (or simply did not comprehend) the page’s clumsy attempt to use irony to assess the holocaust’s social meanings.  The Israeli page collected youths’ concentration camp selfies, and the images push irreverence and irony beyond many peoples’ tolerance: the page included typical selfie poses of pouting expressions and stylized self-contemplation, but these selfies were at places like the iconic Auschwitz gates or had sarcastic added descriptions such as “Even here I’m drop dead gorgeous!”

The strained irony of the facebook page was wasted on most audiences eager to patrol memorialization ethics or unable to fathom an ironic critique of holocaust symbolism.  Countless tourists take pictures at historic sites including Auschwitz every day, though, and those pictures include numerous crass images shared with the internet.  Yet selfies seem to break some unwritten codes about heritage tourism, especially in visits to dark historical spots.  Tourists’ arm-length self portraits at historic sites appear to represent only a modest percentage of the countless publicly accessible selfies.  Nevertheless, there are scores of selfies taken at nearly every heritage site that a tourist would snap an otherwise mundane image.  A host of selfies have been taken at the 9/11 Memorial, for instance, and some photographers themselves concede that the setting is perhaps awkward.  Numerous visitors to Washington DC pose in front of the Martin Luther King Jr. Memorial for a selfie, in some cases reproducing King’s iconic statuary stance.  Totem and Taboo collects images of gay men’s Grindr profile images taken at the Berlin Holocaust Memorial.

Selfies at the Acropolis (image from Rob).

In the case of Auschwitz there are genuine codes against some photography (e.g., of the human hair on display or the Block 11 cellars), but most historic sites’ photography rules simply focus on collection preservation.  Some selfies may violate the unspoken ethics of respectful memorialization, and perhaps a selfie at Mount Vernon, Hadrian’s Wall, Graceland, Dealy Plaza, the Parthenon, or Monticello has somewhat different ethical dimensions than an image from Auschwitz, Treblinka, or Mauthausen.  Nevertheless, it is simplistic to reduce all those tourist images—including selfies—to ego exhibitions.  It also makes some sense to examine the distinctive social work of tourist selfies that contrasts to the broad range of self-taken images that get classed as selfies.

Many historical places are already in our visual memory because of the photographers who went before us:  for instance, Auschwitz’s iconic gates, approaching train tracks, and razor wire fences are rooted in our collective visual imagination because of wartime photography and a host of popular cinematic depictions.  Photographer Roger Cremers suggests that Auschwitz is so well-known visually that he chose to document tourists’ photographic experience at Auschwitz with an eye toward illuminating how visitors visually document a place that is simultaneously familiar while its meaning is rooted in unimaginable evil that is difficult to articulate.  Not surprisingly, many tourists at Auschwitz reproduce familiar settings and normatively document the same visuals; many selfies at historic sites likewise seek out the familiar vista on a site like the US Capitol, Big Ben, Disneyland, or the Statue of Liberty.

Selfies at the gates to Auschwitz.

In the wake of the New Yorker article a few people on the Auschwitz facebook page lobbied to eliminate photography at the site altogether, but this position probably underestimates the anxious self-consciousness many photographers feel at contested historical sites.  In his study of youth visiting Auschwitz, Thomas P. Thurnell-Read found that every visitor he interviewed was conflicted by photography, but all apparently still took photographs.  A 21-year-old Canadian tourist acknowledged that “I didn’t want to turn it into a spectacle because that would bother me later.  But I wanted to know, like I wanted to remember.  I almost regret it but I took two photographs in the crematorium…and, I was, like, what am I doing? But, I did.”  For Thurnell-Read’s subjects, simply seeing Auschwitz was insufficient, even though many indicated they knew the visual images of camps from wartime photography and popular sources like Schindler’s List.  Their camp photographs were meaningful and even authentic because they were based in a personal experience of the camp space and were not simply a series of disembodied images.

Elizabeth Losh’s study of the Selfiecity database argues that selfies are a transnational phenomenon that is about place-making and not simply the exhibition of faces and bodies.  Like a host of tourist pictures that preceded them, the selfies and digital photo albums are partly place-making projects in which the sense of a historic place is fabricated around a tourist’s gaze.  A selfie essentially writes its subject into history and visually invokes a heritage without articulating its meaning; in many of these most complicated histories, a picture of the Auschwitz gate or the 9/11 Memorial panels invokes much more fluid and personally idiosyncratic meanings than a textual narrative of the experience.

Many observers seem to consider selfies a uniquely narcissistic generational transgression of appropriate historical solemnity.  The critique of youth behavior at historic sites perhaps betrays a deeper anxiety of the perpetual identity fabrication that Sherry Turkle argues many adolescents are engaging in on facebook, Instagram, snapchat, etc.  The tendency to document experience and self visually and instantly rather than in a text-driven narrative may indeed be generational, and selfiecity’s research confirms that the average age of selfy photographers is indeed young (23.7 years of age).

The heart of selfie photography in historic sites is perhaps personal imagination; it is less what we look like—and what a historical site “really means”—than it is about what we imagine we look like and what a historical site means.  One of Thurnell-Read’s subjects touring Aushwitz focused on imagination and said he “liked that it was underdeveloped, the fact that it was in ruins, again, the faculty of mind, it helps, because you had to conjure up images yourself which made you think more.”  Historical selfies certainly harbor some normative ideological effects ranging from visual representation of the self to the guise of attractiveness that shapes how many people view selfies, and in some spaces we may expect some codes of dignity.  Nevertheless, historical selfies simultaneously reflect a telling if idiosyncratic effort to visualize and give meaning to a personal tourist experience.

The facebook group The Selfies Research Network marshals a ton of good scholarship and popular thinking.

2014 Facing the Selfie.  Committee on the Anthropology of Science, Technology, and Computing (CASTAC) Blog, 24 June.

2014 The Epistemology of the Second Selfie: What Queer Teaches Us About Digital Display, Surveillance and Power.  Paper delivered to the International Communication Association. 22 May.

2011 Alone Together: Why We Expect More from Technology and Less from Each Other.  Basic Books, New York.

Selfies at the Acropolis image from Rob

Selfie at the Lincoln Memorial image from Joe Flood

← Imagining the Black Suburbs: Homogeneity and African American Suburbia
The Optimism of Destruction: Demolition and the Future of the Historic City →