← Beautiful Absence: The Aesthetics of Dark Heritage
The Elevated Eye: Drones and Gaze in Ruins →

The Materiality of Virus: The Aesthetics of Ebola

Flu patients being treated at Camp Funston, Kansas during the 1918 epidemic (image National Museum of Health and Medicine).

In 1918 over 500 million people were infected by the influenza virus, and its lethality–between 20 and 100 million people died—reaches well beyond AIDS, the Plague, and even the Great War itself.  It is not difficult to comprehend the terror induced by viral disease: we live in a historical moment in which some infectious disease can be rapidly spread aboard airlines and cruise ships; the media and a host of online outlets fan anxieties about epidemic diseases; and popular culture delivers warnings about apocalypse, zombies, and doomsday preparations.  In contrast to the European battlefield in 1918, it was enormously difficult to imagine the material form and aesthetics of a virus that moved invisibly and left as its material wake broken and dead bodies.  Viruses are terrifying because they are so hard to imagine as concrete things, so we spend much of our energy imagining how we can perceive and protect ourselves against an unseen specter.

Center for Disease Control and Prevention image of the Ebola virus.

The Center for Disease Control and Prevention’s page on Ebola currently greets the wary with a colorful and even appealing graphic of the virus’ tendrils.  Certainly much more of the visual representation of Ebola has been strictly of its effects, such as the medical teams armed to treat victims, visual representations of symptoms, maps charting the geographic spread of Ebola, the implications for travelers, specific symptoms to be wary of among your friends, cemeteries for the victims, ambitious overviews of the disease, and even Ebola’s impact on the cocoa trade.

Visual representations of Ebola shape our emotional imaginations of the virus’ real or potential effects.  Hélène Joffe and Georgina Haarhoff’s 2002 study of media coverage of Ebola in the mid-1990’s UK found that Ebola was systematically represented as an African disease (a characterization that holds true for the contemporary US as well).  They found that “pictures accompanying the tabloid articles are most often of westerners in space-suit-type outfits endeavouring to control the virus in Africa,” but they concluded that few people critically reflected on such images or had much recall of specific visuals.  One ethnographic interview subject told Joffe and Haarhoff that “I thought the pictures of all these people dressed up in these spacesuits were quite funny really, because they looked a bit like they were out in space or something … but I can’t say I really thought about it a lot more than that.”

Visuals of the virus itself adorn many media reports aspiring to evoke the authenticity of a microscopic threat.  These images are identical to the visuals Joffe and Haarhoff identified in 2002, when they found that “the most common type of picture accompanying the broadsheet articles is of the Ebola virus, as one might find in a medical textbook.”  The most recent flurry of American media images of the virus are rendered in many different shades including green and red, electrifying blue, red and yellow, or soft slightly psychedelic tones.  Scanning electron micrograph images of virus-infected cells provide a somewhat different visual, and they can be colored in a relatively wide range of ways.  The more creative visual representations of the virus portray it as a three-dimensional red root, virus particles attached to an infected cell, or something resembling a dense tubular shag rug. 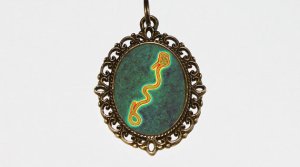 Perhaps the symbolic power of Ebola is most clearly confirmed by the universe of products that provide material representations of Ebola beyond visual images.  On Etsy, a legion of craftspeople are providing a universe of tangible things representing Ebola.  These include necklace pendants, cross stitch, picture necklaces, pet tags, aprons, underwear, onesies, cutting boards, tiny specimen bottles, glass dishes, and a host of t-shirts.  Giantmicrobes has been selling Ebola plush toys since 2005, with its worm-shaped stuffed animals and Ebola virus petri dish carefully negotiating the distinction between scientific educational toy and gag gift. 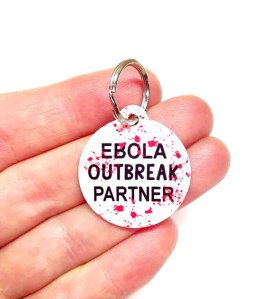 At some level, nearly all of these things are simply vehicles of ironic humor.  For instance, the blood-spattered pet tag emblazoned “Ebola Outbreak Partner” ensures that your cat or dog will follow you into an Ebola-induced apocalypse; should you make it out alive, the other side of the tag includes the contact information for your four-legged friend.  The Ebola Epidemic cutting board cheekily promises it “has it all: Ebola, Salmonella, Swine Flu, Bird Flu, Meningitis and more.  Great for any mysophobiac or hypochondriac.  Now you can tell your guests everything was prepared on a cutting board riddled with bacteria and viruses.”  The Ebola Virus Specimen is a vial with an Ebola virus strand submerged in clear resin and “securely shut so don’t worry about the virus leaking out.”  Other things are somewhat more distinctive.  The Ebola virus rain brief panties, for example, have “contagious Ebola virus hand painted back and front” to greet your partner (or secretly laugh at your own irreverence), and the panties’ description includes a link to a Guardian article outlining how to avoid contracting the virus.

Some observers seem reluctant to profit from Ebola, and a few marketers are wary that their Ebola products might be misunderstood.  An Ebola cross-stitch seller on Etsy observes that the design was “originally requested by a scientific researcher in 2012” from her microbes and germs design series, which ranges from Toxoplasma to E. Coli.   The seller is quick to note that the Ebola design is “not intending to belittle the experiences of those who have experienced that tragedy first or second-hand. … When the outbreak began, I considered removing the ebola cross stitch from my listings, but I chose not to for the simple reason that ebola has existed for a long time; it has always been deadly; if it’s not okay for me to stitch an image of the microbe now, then it was never okay and I should stop stitching not only ebola but all the other microbes that cause personal and social tragedy.”

Beyond the distinctive taste that most of these things invoke, the materialized Ebola irreverently pokes fun at pandemic alarmists who foresee an Ebola apocalypse.  The federal response to Ebola has perhaps been confusing, but there seems to be little danger that apocalypse will be unleashed by Ebola.  Indeed, the humor directed toward Ebola may reflect that many people are not especially alarmed by the potential for contracting the virus, and it may suggest that many of us are not swayed by apocalyptic alarmism.  Nevertheless, viral diseases create genuine anxieties that are fanned by confusing media coverage and a chorus of observers without significant scientific credentials.  Viewed in that light, prosaic things like earrings and shirts might be most productively viewed as extensions of our visual imagination and attempts to capture and define that which we cannot even perceive with human senses.

2002 Representations of far-flung illnesses: the case of Ebola in Britain.  Social Science and Medicine 54(6):955–969.  (subscription access)

1998 Pictures of a virus: ideological choices and the representation of HIV.  French Cultural Studies 9(27): 337-349. (subscription access)

← Beautiful Absence: The Aesthetics of Dark Heritage
The Elevated Eye: Drones and Gaze in Ruins →