← Spacious Vulgarity: The Aesthetics and Morals of McMansions
The Last Holdouts: Community Displacement and Urban Renewal on the IUPUI Campus →

The Trauma of Things

The Tower of Faces in the Holocaust Memorial Museum

In 2013 the Washington Post’s Ken Ringle probed the unsettling experience of visiting Washington’s United States Holocaust Memorial Museum.  The museum revolves around traumatic things, images, and narratives that visitors vicariously contemplate across time and in the face of the inexpressible irrationality of hatred.  The museum provides some concrete mechanisms like “privacy walls” to avoid some of the most unsettling material and visual dimensions of the museum’s narrative; nevertheless, Ringle argued that the museum perhaps collapsed that distance most effectively when visitors “have to look into the face of someone caught in the Nazi death machine.”  The Tower of Faces, for instance, is a massive three-story installation of 1,032 images of the residents of Eishyshok, a community in contemporary Lithuania where the Nazis massacred nearly the entire town in 1941.  Ringle argues that the pre-war family photographs are among the museum’s objects, images, and stories that force visitors to confront their “limit” by displaying prosaic humanity while acknowledging how these lives tragically ended.

Cutlery recovered from a holocaust site are typical of the prosaic things that populate much of the Holocaust Museum.

The everyday things populating the archaeological record secure much of their power from their familiarity—personal trinkets like eyeglasses and jewelry, food, and bodily remains themselves narrate humanizing stories, but those sympathetic and even uplifting human experiences are simultaneously complicated by sober realities.  Scholars often champion narratives that aspire to define the concrete realities of human adversity if not despair, often with an ambition to examine the lingering effects of historical trauma.  Archaeology in particular has gradually shifted its focus from material description toward “dark” histories of enslavement, racism, warfare, sexism, and violence that perhaps strike some observers as a rather bleak picture of everyday life across time and into the present.  Human tragedies and adversities materialized in things often spark emotional responses that archaeologists aim to channel into reflective discussion.  This may come as a surprise to observers who fantasize archaeology as a dispassionate empirical description of the distant past that has no substantive connection to contemporary life, and some people inevitably will find history’s trail of horrors profoundly disconcerting if not an ideological distortion of a more-or-less placid human experience.

Shoes confiscated from prisoners at Majdanek.

Since historical narratives can be unsettling, academics and museum scholars often caution students and visitors that some scholarly data may be personally distressing.  Such practices alerting an audience to emotionally challenging material are sometimes dubbed “trigger warnings,” a darling target for a host of anti-intellectual populists.  This week University College-London archaeologist Gabriel Moshenska became the latest scholar to be lampooned over his precaution that students in his Archaeologies of Modern Conflict course should recognize the material may be troubling.  Moshenska’s express concern was for military veterans, but predictably shallow media observers with no grasp of archaeology used the course’s caution to launch an attack on a generation of “soft” students and over-indulgent professors.

The Spectator’s Brendan O’Neill unleashed the most hyperbolic attack, ridiculing the notion that “‘bones can be scary.’”  Building on his own rich record of right-wing trolling, O’Neill argued that the caution was symptomatic of “the relentless infantilisation of students, the treatment of them as overgrown children liable to be plunged by mere words or images into actual trauma.”  The Daily Mail sounded a similar note when it suggested that “students at one of Britain’s leading universities have been given permission to walk out of classes if they find dealing with the past too traumatic.” 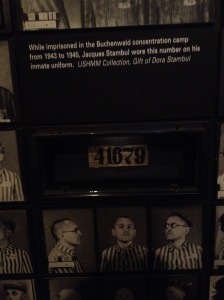 In the midst of the Holocaust Museum’s prosaic material objects are the things defining subjects like Jacques Stambul, who was imprisoned in Buchenwald.

These conservative ideologues are disinterested in archaeology, of course, instead using the conflict archaeology course’s caution as a thin pretense to bemoan the liberal academy and sound shallow anti-intellectual mantras.  In 2015 Greg Lukianoff and Jonathan Haidt melodramatically protested that course cautions are part of a pattern that threatens to “scrub campuses clean of words, ideas, and subjects that might cause discomfort or give offense.”  They argued that “the very idea of helping people with anxiety disorders avoid the things they fear is misguided,” complaining that course cautions amount to a “coddling” of American students.  O’Neill lays the blame squarely at the feet of academics: “the new campus craziness, the wild allergy to difficult debate and fear of offensive texts, doesn’t always come from students themselves.  It’s been institutionalised, among actual academics,” and O’Neill and the Daily Mail alike argue that this infection can be traced back to American academics.  America’s prominent conservative Breitbart news has jumped onto the attack on academics, calling Moshenska’s caution yet another example of “Special Snowflake Safe Space Lunacy.”  Breitbart theatrically lament that classroom cautions will produce “battlefield archaeology graduates who are triggered by the site of scary bones of people who died horribly.”

What is underscored by Moshenska’s research and broader conflict archaeology is the profound emotional power of things and archaeological narratives.  Alix Mortimer defended Moshenska by arguing that “If you’re not slightly freaked out by conflict archaeology, there’s something wrong with you.”  Mortimer emphasizes that much of Moshenska’s scholarship focuses on human remains and historical events from the 20th and 21st centuries, and in some ways those most recent pasts are more likely to feel unsettling than more distant violence like the murder of Ötzi.  Carl Drexler’s defense focuses on Moshenska’s own commitment to the scores of veterans in many university classrooms who certainly can stake a substantial claim to post-traumatic stress.  Acknowledging such experiences frames course cautions as simple human decency that does not set aside academic rigor but does recognize that we all experience heritage in a vast range of ways.  In 2015 philosophy Professor Kate Manne agreed that course cautions are expressions of consideration for students that enable rational engagement.

Suggesting that course cautions constrain critical discourse and yield a generation of spineless students ignores the profound power of well-told historical narratives, and it certainly underestimates the emotional power of material things.  That sway of things is what attracts most archaeologists to the discipline, and archaeologists’ widespread commitment to illuminating untold and often challenging historical experiences unites them with visitors to places like the Holocaust Memorial Museum.  Those places aspire to fashion reflective discussions about histories that some people may find unpleasant, and it seems perfectly defensible that even thoughtful scholars and well-prepared visitors would find a visit to Auschwitz or an encounter with the remains of murder victims emotionally unsettling.  Indeed, as Alix Mortimer argues, it would be alarming to find scholars who are not moved by their scholarship, especially archaeologists working with contentious narratives and the material traces of tragedy.  It might be even more alarming to find archaeologists and professors who have no regard for their students’ experiences.

2015 Ethics and the Archaeology of Violence.  Springer, New York.

2014 Children in ruins: bombsites as playgrounds in Second World War Britain. In Ruin Memories: Materiality, Aesthetics and the Archaeology of the Recent Past, edited by Þora Pétursdóttir and Bjornar Olsen,  pp. 230-249. Routledge, Abingdon UK.

← Spacious Vulgarity: The Aesthetics and Morals of McMansions
The Last Holdouts: Community Displacement and Urban Renewal on the IUPUI Campus →