In July 1905, Martha Spinks was buried at the Central Indiana Hospital for the Insane, laid to rest among hundreds of patients to die at the hospital since it opened in 1848. Like many of the men and women treated in the hospital, Spinks’ story has been forgotten as she quietly rested on the grounds of what became known as Central State Hospital and eventually closed in 1994. Spinks was among the last patients to be buried on the grounds of the hospital, which indicated in 1908 that 4,704 patients had died since the hospital opened in 1848. If patients’ bodies were not claimed by their families they were buried in the northwest corner of the hospital grounds, and some were used for medical training. In 1889 the Hospital’s yearly report announced that the administration planned to place posts with the name of each deceased patient at the head of their grave, but this plan does not appear to have been systematically followed. In the early 20th century patients began to be buried at the neighboring Mt. Jackson Cemetery, with the last burial on the hospital grounds around 1905 but perhaps as late as August 1909. END_OF_DOCUMENT_TOKEN_TO_BE_REPLACED 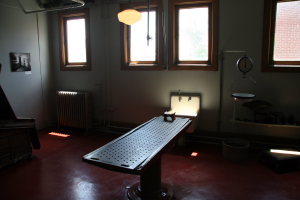 In September 1903 The Indianapolis Journal reported that Oliver S. Clay and his mother Charlotte “for years have lived in their home at 1405 East Sixteenth street, but on account of reverses, financial and otherwise, were compelled to mortgage their property for several hundred dollars, which, on becoming due, remained unpaid.”  In many ways, Clay’s story of ill fortune might well be told of many of his early 20th-century neighbors.  His father J.H. Clay had been the Pastor of the Bethel AME Church in Indianapolis until his death in 1892.  After his father’s death Oliver was an advocate for African-American education and a Black political party, and in the 1902 election he led an African-American movement to vote a blank ballot, telling The Indianapolis Journal that “if the white politicians will give the negroes recognition then he will advocate voting.”  However, like many Americans entertaining the American Dream, Clay’s ambition and hard work ended in tragedy as he was evicted, institutionalized, and eventually relegated to a potter’s field.  The ultimate fate of his mortal remains punctuate both his unfortunate end and the way contemporary society routinely ignores the unpleasant histories at the heart of American life.

In 1901 the Public Library Bulletin reported on Clay’s aspiration to turn his home into what he dubbed the Claysonian Library.  Clay’s collection included “the 315 volumes comprising the library of his father, the Rev. J. H. Clay, deceased, to which have been added by donation a sufficient number of books to make the collection 521 volumes, besides miscellaneous magazines and periodicals.  The object is to cultivate a taste for literature among the young colored people, especially of the immediate neighborhood.”  Oliver Clay’s neighborhood library was dedicated in April 1901 on what would have been his father’s 51st birthday, and several months later he received a gift of 50 volumes from Congressman Jesse Overstreet.  The library subsequently hosted regular events at the Clays’ home and local venues, such as a lecture on the Emancipation Proclamation’s 40th Anniversary in January 1903.

In August, 1903, though, the Indianapolis Sun reported that Clay “has, with the furniture of the institution of which he is founder, been ejected into the street.”  Clay moved his things back into the home and told the newspaper that “`You may say, mistah, that the Claysonian will be re-established in other quatahs soon and that the good work started by me will never die.’”  In September a realtor returned in an effort to eject the Clays and once again “started to move the furniture out into the street.  When he looked up he was gazing into the barrel of a revolver held firmly in the dusky hand of the Claysonian.  `Claysonia forever!’ cried Oliver Clay, `and if you dare to move anything from this house you will forfeit your life.’” END_OF_DOCUMENT_TOKEN_TO_BE_REPLACED